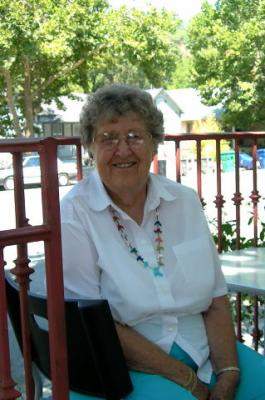 Born on September 8, 1922 in Beaver, Oklahoma, she graduated from Dodge City High School in 1940.

She was preceded in death by her husband, Homer Minton (1917-1998). The couple was married in 1941, making their first home in Dodge City, Kansas. In 1944, during World War II, they moved with their two children, Jim and Betty, to the Los Angeles area, where their third child, Sherry was born in 1946. The family settled in Redwood Valley in 1947, moving to Ukiah in 1956 shortly before the birth of their daughter Jan. Many years later, the couple moved to Willits, where they lived for 18 years, before returning to Ukiah in 1994.

Called "Grandma" by all her children, grand children, and great- grand children, Virginia will be missed by all who remember her warm and welcoming home, where love and good food were always available. Grandma loved to garden, and was known to cook and serve many birthday and holiday meals from a small kitchen for as many family members who wanted to come. Her special pancake and pickle recipes are still used in the family!

Grandma took great pride in her grandchildren and great grandchildren, and was always willing to babysit at a moment's notice. She loved to crochet baby blankets, and knitted personalized Christmas stockings for all the kids. She never forgot a birthday or anniversary.


To order memorial trees or send flowers to the family in memory of Minton, Virginia Lee, please visit our flower store.