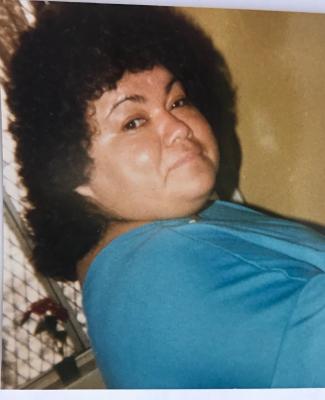 Obituary:
Adela "NANA" Mora Tejeda (Bermudez)
Born September 8, 1953 in Mexicali, Baja California to Pablo and Juanita Mora, who met her at Heaven's Gate along with our dad Ruben Bermudez and welcomed her with open arms. She was the only sister of 14 siblings, (12 brothers and 1 sister) for 16 years until she was blessed with her only sister. She was raised in Mexicali, BC. She was a migrant farmworker and worked all along the Imperial Valley thru the Central Valley with her parents and siblings. In 1975 at the age of 21 she moved all the way north to Mendocino County where she began her new life making her own family. Slowly her siblings followed. She worked in the pears picking and sorting during the day in the orchards, as well as at night at Alex R. Thomas Pear Packing Sheds.

Spanish was her primary language and realized that the only way she could make a better life for herself was by learning to speak English. She attended night school to learn to speak it. She received her GED and proceeded to attend Mendocino College. She graduated with two AAs with a major in Early Childhood Education. While attending college she would tutor other students in Spanish to make extra money. She became a Preschoool Teacher. She was employed with NCO Headstart as a Home Base Teacher. She taught kids at their homes. She loved her occupation. She enjoyed helping others in any way she could. She always said if I can help others who are in the position I was once in, then why not help them so that they don't go thru the troubles I went thru and they too can succeed. She believed in helping her community. She was a member of the Concilio Latino Americano Club in the 80s. In the 90s she was Co-Director of a support group for hispanic families with disabilities and disabled children. Enjoyed helping cook for fundraisers or special events. Volunteered with Mexican Consul Mobile events by helping fill out the applications for those who didn't know how to read or write but needed new passports and IDs, when hosted by California Human Development.
Adela was known for her sense of humor, kindness, strength, love and compassion for people. Her doors were always open to anyone at any time no matter how late at night. Always willing to help with no judgement. She always said everyone makes mistakes, no one is perfect. If we fall we get back up and keep going. You can always start over or keep going where you left off but we don't give up. That's who this amazing woman was. Her family and community were her priorities. She taught us culture, morals and respect and that no matter what life hits us with Jesus Christ never leaves our side.
She is preceded by her brothers Miguel Mada, Eduardo, Guadalupe, Mario, David Mora.
She is survived by: Husband Pablo Tejeda; Daughters; Juanita Plaza, Laura Bermudez and Maria Barro; Sons;Victor Hugo Mora and Efrain Sergio Barron; Grandchildren; Arlo Brmudez, Eduardo "Eddie" Holbrook, Ethan Holbrook, Victor Jr. Mora, Adrian Mora, Rosie Mora, Carmina Mora. Sister; Laura Mora Bravo (Israel), Brothers; Pedro (Jacinta) Mora, Jose (Senaida) Mora, Antonio (Sherrie) Mora, Serafin, Arturo, Pablo Mora and Ferndando Mada. Numerous Neices and Nephews.

To order memorial trees or send flowers to the family in memory of Mora Tejeda, Adela "Nana", please visit our flower store.