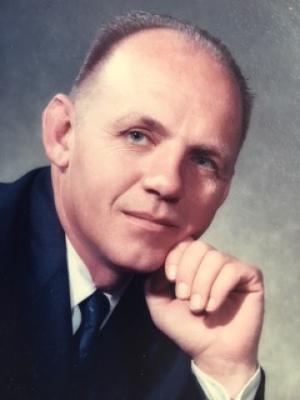 Obituary:
ALFRED STANLEY NICOLAISEN born February 10, 1925 in Oakland CA and died September 22, 2017 in Ukiah CA of natural causes surrounded by his family. He was 92 years old and had suffered a stroke which left him unable to walk for several years.

He served in the Navy from 1943 to 1946. In 1956 he moved his family to Ukiah where he enjoyed sailing, hiking, and exploring the countryside. Eventually he founded and ran his own dental lab until his retirement in the 1980s.
Alfred was involved in several community based service organizations including Rotary, the Presbyterian Church, the Ukiah Dolphins Swim Club, the Grace Hudson Museum to name a few.

After retirement he travelled extensively around the US, Canada and Mexico. In 2002 at the age of 77 he, along with a group from the Presbyterian Church, travelled to Kenya to help build the Karai Children’s Home sanctuary in Kikuyu. During a visit to a Maasai village he was honored by a Maasai elder who gave him a hand carved chief’s staff denoting his status as an elder in the community.

Alfred was known for his wit and sense of humor. He most enjoyed working with young people through the Dolphins Swim Team or as a sailing teacher. He will be missed by so many whose lives he touched.

Alfred is survived by his daughter Adriane Nicolaisen of Mendocino. He is also survived by his sister Barbara and brother Alan, both of Fremont, and his brother Robert of Santa Cruz along with numerous nieces and nephews and their children. He was preceded in death by his mother Kathleen Spear-Nicolaisen-Reese, his father Alfred Nicolaisen and his older sister Kathleen Nicolaisen-Buckley.
His ashes will be interred at St. James Episcopal Church in Fremont alongside members of his family.


To order memorial trees or send flowers to the family in memory of Nicolaisen, Alfred Stanley, please visit our flower store.