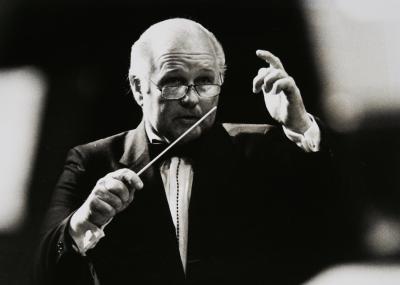 Obituary:
On Sunday, April 9th, Rowland Nielson’s incredible spirit left us to be with his Heavenly Father. He was surrounded by his family and ended his battle with cancer peacefully.

Clyde Rowland Nielson was born in San Bernadino, CA to Clyde Leon Nielson and Geneva Hunt Nielson on January 22, 1932 and grew up in Blue Lake California, Humboldt County. He served his country in the Marine Corps during the Korean War and later played in the Marine Corps Band. He met his wife, Elsie snow skiing on his cherished Mt. Shasta and they remained married as partners and best friends for the next 55 years.

After graduating from California State University, Humboldt with a Bachelor’s degree in music, he accepted his first teaching position at Willits High School in 1962. In 1965, he moved to Ukiah High School where he remained the band director for 29 years teaching multiple generations the love of music and the importance of dedication, pride and perseverance. He later earned his Master’s degree in Music from California State University, Chico. His accomplished bands participated in the Super Bowl, the Pasadena Rose Parade, the 50th Anniversary of the Golden Gate Bridge and traveled to Victoria, British Columbia as well as various other places for close to three decades. He constantly recited to his students, “Good, better, best. Never let it rest, until your good is better and your better is best.”

He shared a passion for diverse hobbies, the outdoors and had an amazing ability to connect with people. He was a dedicated member of the Latter-Day Saints Church, the golf coach at Ukiah High school, a board member for the California Band Director’s Association and a founding member of the Northern California Band Association, a non-profit dedicated to music education and supporting young musicians. He loved to snow ski, water ski, fly kites, play golf, camp, travel, watch Giants baseball, Warriors basketball and was one heck of an angler. He soaked up every precious moment of his life.

Rowland is survived by his wife Elsie, his son and daughter-in-law, Derek and Jennifer Nielson, his daughter and son-in-law D’Lisa and Eric Crain, and his grandchildren: Brandyn Nielson, Alex Nielson and his wife Sarah, Addison Crain and Cash Crain. He is preceded in death by his father Clyde Leon Nielson and Geneva Hunt Nielson.

Services for Rowland Nielson will be Wednesday, April 19th at 11 a.m. at the LDS Church in Ukiah, 1137 S. Dora Street. There will be a graveside dedication at Russian River Cemetery immediately following the service and concluding with a reception at the LDS church.

The family is requesting that in lieu of flowers, individuals consider making a donation in Rowland’s name to Ukiah Hospice 620 South Dora Street, Suite 101. http://www.hospiceofukiah.com/donations.html


To order memorial trees or send flowers to the family in memory of Nielson, Rowland, please visit our flower store.