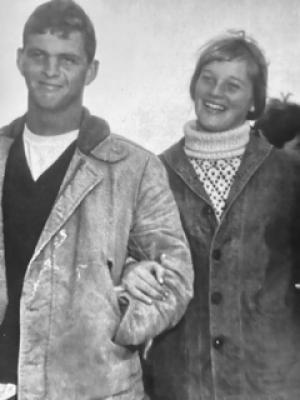 Obituary:
Capt. Russ Nyborg crossed the Final Bar on October 14th 2021. He leaves in this world his loving wife Ann and three children, Tara Larwood, Inger Mattern, and Einar Nyborg, all living in Ukiah, California.
Russ and Ann were born and raised in the Northeast and moved to California in 1958. Russ served in the Marine Corps but was released prior to active duty. He was interested in a career at sea and joined Sterling Hayden on his sailing vessel WANDERER sailing the South Pacific. Ann also served aboard this vessel with Russ.
Eventually settling in Mill Valley, California and starting a family, Russ began work with various marine towing companies, towing barges to Alaska during the sealift to build Alaska’s North Slope oil field. Russ advanced to Master of Towing, becoming a captain, and eventually a pilot for Red Stack Tug Company in San Francisco Bay.
Russ excelled in his piloting career and in 1985 became a partner and pilot with the San Francisco Bar Pilots. Russ retired from this long seagoing career as President and Port Agent for San Francisco Bar Pilots. Captains the world over, whose ships were handled by Russ remember him as an expert ship handler, who guided their vessels across the San Francisco Bar, to a safe berth in the Bay. Russ was known in his field as one of the finest pilots of his time, able to safely manage extreme ship docking maneuvers under difficult conditions.
In 1972, in an effort to take his family away from the city, Russ and Ann purchased a house on 34 acres of bare land on Old River Road south of Ukiah. Together they would build Whaler Vineyard and Winery, becoming known for producing and bottling exceptional red wines.
Inspired by their father, Tara and Einar attended California Maritime Academy and embarked on careers at sea. Einar continues crossing the Bar as a ship pilot in his father’s wake. Inger is a retired Firefighter/Paramedic with the City of Ukiah and currently a winemaker and vineyard owner with her own label Lost in the Cellar and is making her mark in a field that was also a passion of her father’s.
Russ was a man of quiet and simple wisdom, who put a high value on honesty, character and hard work. Russ will be missed dearly by many.
Russ was proceeded in death by his parents, Einar and Ruth Nyborg and his brother Will Nyborg. Russ is survived by his wife Ann Nyborg, their children Tara(Dan) their children Reef, Mariah and Teak, his daughter Inger(John) their children Tucker(Tess), Leif(Erica) and Shayne, his son Einar(Katie) their daughter Emma and Katie’s children Amy(Craig) their children Wyatt and Ella, Cody(Tatianna) their daughter Kaia, and Russ’s sisters Lynn(Terry) and Jani(Peter) along with numerous nieces and nephews.
A Celebration of life will be held March 11, 2022 2 pm at Whaler Vineyard
6201 Old River Rd, Ukiah CA 95482


To order memorial trees or send flowers to the family in memory of Nyborg, Capt. Russell Marinus, please visit our flower store.