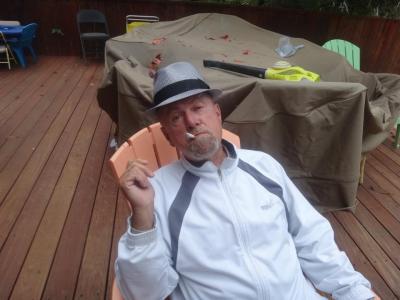 Obituary:
Kevin Francis O’Boyle, 72, of San Francisco, died suddenly at home in the early morning of September 9, 2017. The City of San Francisco lost a native son, a legend, a character, an old‐school man with a gentle soul and a sharp wit, who appreciated and embraced the joys of life and who did things his own way, at all times.

He was born in San Francisco on March 2, 1945, and attended St. Cecilia Elementary School and Lowell High School. He received his BA in Social Work from San Francisco State University. From 1982‐2005, he was part of the leadership team at TK’s Cocktail Lounge on West Portal, where he honed his natural gift of storytelling. He was a professional poker player and was known at tournaments around the West, and probably recognized by his smile at Lucky Chances in Colma.

Kevin grew up in the Parkside section of the Sunset District on 21st Avenue and Rivera, around the corner from lifelong friends that included Tommy Sharp and Sal Mercurio. He was part of a neighborhood of boys who became brothers. He was the youngest of four children of Patrick and Noan O’Boyle, who immigrated to San Francisco from Ireland. He is survived by his siblings Geraldine Riordan of San Francisco, Emmett (Cicely McCreight) O’Boyle of Salinas and Mary (Michael) Barry of San Jose.

Kevin’s most enduring friendship was with his wife and life partner Martine O’Boyle, who for the past 37 years shared Kevin’s adventurous joie de vivre. Kevin is so lucky to have had someone who accepted him for who he was. They traveled the world extensively together. In fact, Kevin just returned from an epic trip to the Philippines a few weeks ago.
Kevin cherished being a father to his children and loved them all fiercely. He delighted in watching them grow up into their own people. His children will miss him more than they can express. He was father to Buffy (Patrick) Maguire, Deirdre (Michael) Nagayama, Patrick (Nicole Achacoso) O’Boyle, Stephanie (Shaun Wilson) O’Boyle.

Kevin was overjoyed to become a grandfather, and he relished his role as “Poppy” or “Pops.” Kevin was preceded in death by his eldest grandson and namesake, Kevin Maguire. His surviving grandchildren are Conor Maguire, Kian O’Boyle, Jules Nagayama, Dylan Maguire, Sloane Nagayama and Chloe Wilson. He was an active grandfather and enjoyed spending time with his grandchildren immensely. He picked them up from school, attended their sporting events, took them to K1 Speed, and indulged them in copious amounts of cheeseburgers at diners. He gave them the occasional ride in his silver Porsche 911 with top down, and he may have driven a little too fast and seatbelts may, or may not, have been used.

Kevin’s life will be celebrated unconventionally, just as he lived. Please join us on Friday, September 15, 2017 starting at Holy Cross Cemetery in Colma at 1pm, where Kevin’s ashes will be interned with his grandson and parents under the O’Boyle tombstone. Join us at the grave site for a toast to Kevin’s life. Immediately following our toast, the festivities will begin at the United Irish Cultural Center at 2700 45th Ave. Kevin was a great man who lived life to the fullest on his own terms ‐‐ just as he’d wanted. Rest in peace, Dad. You will be sorely missed.

To order memorial trees or send flowers to the family in memory of O'Boyle, Kevin Francis, please visit our flower store.