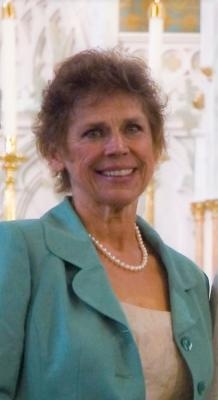 Obituary:
Sharon Suzanne Omey died peacefully on October 7, 2021 in Eureka, CA with her husband and children at her side. She was 79. Sharon was born in Rock Island, Illinois to Vivian and Paul Jackson and was the youngest of four daughters. In 1954 the family moved to Lakewood, CA where she later graduated from Lakewood High School, attended the local junior college and worked at Procter and Gamble as a secretary. While in high school, Sharon met her dear friend Melinda Omey where they were in Yoga Sorority together. Later, Sharon met Jon Omey, Melinda’s brother, and soon they fell in love and were married.
Sharon was a woman blessed with many talents. She was equally skillful with a paint brush on canvas, a chain saw, a sewing machine, a pastry tube decorating a wedding cake, home décor, furniture restoration, construction, demolition, gardening and a host of other talents too numerous to list.
There was truly nothing she couldn’t do. In 1985, Sharon got her Real Estate license and began a long and successful career, regularly winning awards and recognition for sales and her dedicated representation of her clients. Her smile would light up a room, her laugh was infectious and her sense of humor dominated by a dry wit. She was fun and spontaneous. Even as her strength faded in her final years, her good nature was ever present and when you would least expect it, she would throw out a retort that would send everyone into fits of laughter.
Sharon was civic minded, always had a keen sense of right and wrong, and a desire to address a job that needed doing. In 1976, she ran for the Humboldt County School Board, was elected and re-elected, serving for over three decades as a Board member. She also served multiple terms as a City Planning Commissioner. She was committed to bettering the community in which she lived.
A woman of faith and principle, she fought for the causes she believed in and was never one to let others do the hard work.
She was hands on. Through the many years, while raising her children, she fought for pro-family causes, and as a staunch pro-life advocate and champion of the defenseless, you could regularly find her running the pro-life booth at the County Fair or quietly praying in front of Planned Parenthood. Never one to shy away from her principles, Sharon was respected by all. She always walked the path of her beliefs and never wavered from her core values.
Sharon was a dedicated wife and mother. She and Jon were married for 61 years, blessed with a legacy of 5 children, 14 grandchildren and 6 great grandchildren. Each of her children benefitted from the example she set and from her wisdom and instruction. She was gracious and would open her home regularly to strangers, some who stayed for an hour but others who became adopted members of the family.
She loved attending sporting events involving her children and grandchildren. She learned all of the signs and signals made by referees when making a call in football. No one needed to announce the play – Sharon knew it. She taught her children to be independent and strong, she taught them how to make something from nothing, to bake, to remodel, to transform, to garden, to laugh, to learn, to work, to study and to play and she set the example of living your faith. With Sharon, what she said and what she did were consistent.
Above and present in every aspect of her life was her commitment, faith and love of her Father, and Lord Jesus Christ. Sharon was a woman of God and devoted to her Catholic faith and tradition. Her faith shaped her life and that of all those fortunate to be her family and friends. She is one of God’s treasured children.
She will be deeply missed by her family and by others who knew her.
Sharon is survived by her devoted and loving husband of 61 years, Jon Omey; her children – Jon (Lori), Camille, Samantha (Jeff), Luke (Kimberly), and Gretha (Richard) and her grandchildren and great grandchildren – Michelle (Duane), Jon (Lisa), Ben (Stacey), Caitlin, Patrick, Ira, Vivian, Olivia, William, Grant, Jack, Sophia, Joseph, Beatrice, Ursula, Martin, Antone, Eliana, Vincent, Jon and Lane; “adopted” daughter Miryam Sullivan and “adopted” son Alex Belz, and cousins Julie Schmidt and Doris Ruzzi (Mike).
She was preceded in death by her parents Paul and Vivian Jackson, her sisters Bette (Doc), Doris (William), Pauline (Don) and her niece, Christine.
A requiem mass and private burial were held on October 16, 2021 in Redwood Valley, CA. If you would like to give a gift in remembrance, the family suggests a donation to the Holy Transfiguration Monastery in Redwood Valley, CA or St. Bernard Catholic Church in Eureka, CA.

To order memorial trees or send flowers to the family in memory of Omey, Sharon Suzanne, please visit our flower store.