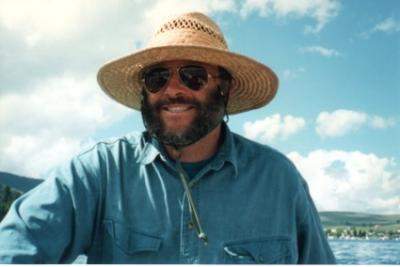 John was born in Pocatello, but he spent his first 5 years in Mackay, Idaho, population 600 on a good day. In 1953, the family moved to Ukiah when his father Ron got a job at the new Masonite Plant and his mother, Marjorie, a job teaching at Nokomis Elementary School. John went to Nokomis, Pomolita, and Ukiah High graduating in 1966, making friends for a lifetime. He spent the next 2 years at UC Santa Barbara getting an education in life, protest, partying, and more, so much so that he then got to go to Santa Rosa Junior College for a year, to make up for the stunning education he received at UCSB. He went on to graduate with a degree in Economics from UC Berkeley – Go Bears!

He then skied all the major slopes in the Pacific NW and BC, finally settling down with a job running a corner market in Sacramento, working at Italian Swiss colony, and other wineries in the region. But beautiful Mendocino County called him back, so he went to Sonoma State University and got his teaching credential. He spent the next 28 years teaching at Pomolita, Potter Valley, and ended his teaching career at Ukiah High School. When asked what he taught, he’d say “heathens”, but he truly loved teaching social studies, particularly to Seniors.

His first marriage produced his daughter Tiera Maelyn. He was a wonderful father, loves her dearly, and made her one heck of a fisherman. In 1988 he met the love of his life, Linda, and thus began their 28 year love affair. They traveled the world, visiting, at last count, 29 countries, in addition to many camping and fishing adventures in the Canyon Lands, the South West, and the Pacific NW. They even pulled their trailer 9000 miles to Alaska and back. John was an amazing fly fisherman, handyman, and builder of things to last. He was overall an accomplished individual in a myriad of ways, and a truly caring and thoughtful man.

He is greatly missed by his loving wife Linda and daughter Tiera, his grandkids Tristan and Naya, sister Marie, brother Jack, neice Kezban and her kids, nephew Sahan, his favorite sister-in-law Kim, his favorite mother-in-law Corky, and too many friends and colleagues to mention.

In lieu of flowers, John and family request that donations be made to the John Pack and Linda Francis Family Fund of the Community Foundation of Mendocino County. The hope is to support a quality community organization with a grant given annually in John’s name. The Community Foundation can be reached at 707 468-9882.

Please join the family in a celebration of John’s life at his memorial, which is planned for Sunday March 13, 2016 from 2:00 – 8:00 at the Saturday Afternoon Club, 107 S. Oak Street, Ukiah. Please bring a favorite dish for our potluck, any photos and stories to share, and your dancing shoes. If you would like a reminder email, send an email to tonionori@gmail.com.

John left us too soon, but will be with us in our hearts forever.


To order memorial trees or send flowers to the family in memory of Pack, John Ronald, please visit our flower store.