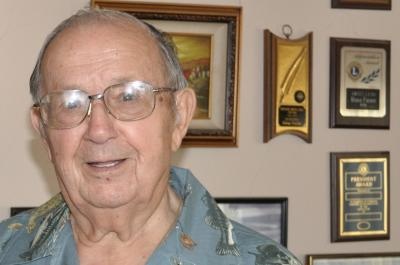 Obituary:
Julio Pardini, age 90 of Ukiah, CA passed away on July 21, 2020. Julio was born in
Reese, UT on June 12, 1930, to the late Julius and Rosa (Puccini) Pardini. He graduated from high school in Pocatello, ID prior to joining the United States Air Force on August 12, 1948. He served at F.E. Warren Air Force Base, WY, Sculthorpe Air Base, England, and Luke Air Force Base, AZ prior to being honorably discharged on March 19, 1951.
Julio married Clysta Irene Nelson of Firth, ID in June of 1952. They were married for 35 years until her untimely death in February 1988. Julio married Marge in July 1989.
Julio was the owner of Mueller’s Victorian Jewelers, purchasing the store from Walter Mueller in July 1982. After retiring from the jewelry business, he worked as Nutrition and Gardening Coordinator at Calpella Elementary School from 2003 – 2015, where he was known as Grandpa Julio.

Julio was a proud member and past president of the Redwood Empire and Ukiah Host Lions Clubs. He was also past District Governor of District 4C2.


To order memorial trees or send flowers to the family in memory of Pardini, Julio, please visit our flower store.