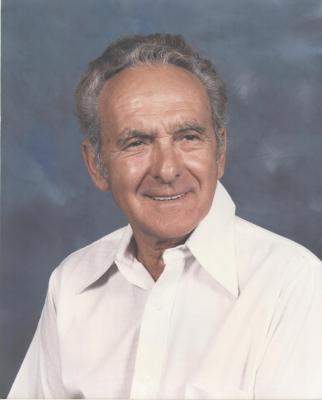 Obituary:
Alfred Richard Pastega “Fred” passed away at Memorial Hospital on March 23, 2015 in Santa Rosa, CA at the age of 90.
Fred is survived by his life partner Dora Lynch, daughter Susan Smith and Husband Richard, Granddaughter Sara Green, Husband Jake, and Great Grandchildren Abigail and Emmaleine. Fred was predeceased by his father and mother Herman & Zairea Pastega, Half Brother & Sister Robert Pastega and Cecelia Scott.
Fred was born on January 24, 1925 in Weed, CA to Herman & Zairea Pastega. He graduated from Weed High School in 1942. Soon after, Fred was drafted to WWII, and served in the US Army as Private First Class, Anti-Aircraft Gun Crewman until his Honorable Discharge on February 9th, 1946. After returning from war, Fred met and soon after married Ruby Curti in 1948. In 1953, they gave birth to their only child, Susan. In 1967, Fred and Susan lost Ruby to cancer. A few years later, Fred was introduced to Dora Lynch, his life partner until the end. Although they never married, they truly enjoyed each other’s company, and their families became one. After moving to Ukiah, Fred began working for Boise Cascade as a mill worker. He then went to Georgia Pacific, ultimately completing his career at Masonite. Fred’s family remembers him as a gentle, hard working, caring human being with a great sense of humor. His best jokes always came out of the Readers Digest.
Fred was an avid outdoorsman, with many proud hunting, fishing, and camping memories with family and friends. He was an extremely proud grandfather and great grandfather, and always claimed he was “The richest man in the world” for having two great grandchildren. Fred consistently aspired to be the next lottery winner, and played weekly, hoping to provide his family a care free life. Fred was an avid gardener, and most considered him to be a true green thumb. His garden was immaculate, and he was extremely proud of his work. One of his other great joys in life was his 1966 Jeep Tuxedo Park Edition which he kept in pristine condition.
A memorial is scheduled for April 18th, from 1 - 4 pm at the Ukiah VFW Hall, 293 Seminary Ave. in Ukiah. All are welcome to attend and celebrate Fred’s life. In lieu of flowers, please send donations to the charity of your choice.


To order memorial trees or send flowers to the family in memory of Pastega, Alfred "Fred" Richard, please visit our flower store.