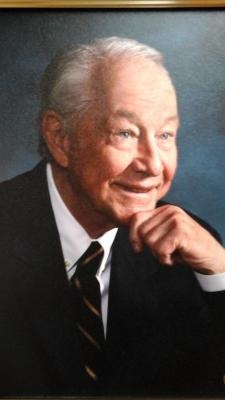 Obituary:
James Garnett Pearce passed peacefully on June 10, 2018. Born in 1931, in Oakland, CA to Nola and Boswell Pearce, Jim lived in Berkeley and moved to Santa Rosa after grammar school. He attended Santa Rosa Junior High School and graduated from Santa Rosa High School in 1950.
He joined the U.S. Navy shortly after the start of the Korean War and served as a Hospital Corpsman with the 1st Marine Division. Jim received the bronze star medal with combat V for his heroism and bravery in saving the lives of three wounded marines by pulling them to safety amid hostile fire.
After discharge from the Navy, he attended the University of California at Berkeley graduating in 1958 with a degree in Business Administration. After graduation he held several marketing positions in the equipment leasing business. Pearce was the owner of the Credit Bureau of Ukiah from 1973 to 2002, when he retired.
James Pearce is survived by his loving wife, Cordelia, and by her children, James, Paul (Abbie), Kimberly (Robert) and six grandchildren. He is also survived by his brother, Jack, and several nephews. He is preceded by a brother, Robert and a sister, AnnaGene. He also leaves behind a very dear group of life-long friends.
A true people-person, Jim loved traveling, boating, flying, golfing, and gathering with family and friends for wonderful meals. He lived life to the fullest and his laughter and joy will be greatly missed by all who knew and loved him.


To order memorial trees or send flowers to the family in memory of Pearce, James Garnett, please visit our flower store.