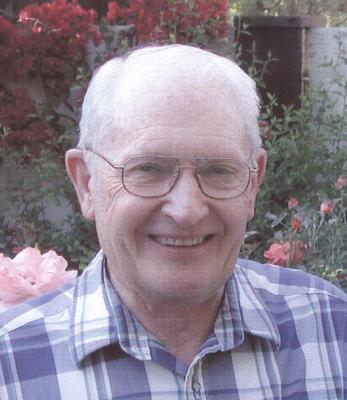 Ed was born in Fort Bayard, New Mexico on April 10th 1931 to Louis Dudley Phillips and Marcella Elizabeth McCreary. His birth location was chosen so Ed’s maternal grandfather, Marcellus McCreary, a physician and administrator of the VA hospital in Fort Bayard, could be of assistance in his birth. Ed grew up in the Pomona area, and graduated from the Pomona High School in 1949.
Ed was a 4th generation California rancher. After graduating from Washington State University with a major in Animal Science in 1953, he served his country by entering the United States Air Force. Upon completing his service to the country he was a copilot with American Airlines for a few years and then returned to the Pomona area to assist his father, Dudley Phillips, with ranching and to pursue other business interests. Ed met his wife, Joan, when they were both working at United California Bank, she as a commercial loan/assistant branch manager and he as trust officer. In 1974, the couple moved to Covelo so Ed could pursue his passion for ranch life. And for more than 28 years he operated his own commercial beef cattle ranch there.
Ed Phillips took an active interest in his community. His Covelo activities included: Past President, Treasurer, and Director of the Round Valley Chamber of Commerce; Past Director of the Round Valley Water District. He received a Certificate of Merit in 1975 from the County of Mendocino in recognition of his work on the General Plan Committee in Round Valley and a Public Service Award in 1987 for serving on the Rural Renaissance Committee. Ed commuted every Monday to attend Rotary meetings in Willits and served that club as president in 1978.
He was past President and Director of the Mendocino County Cattleman’s Association, a past Treasurer and Director of the Mendocino County Farm Bureau. In 1984, he was chosen to represent the beef cattle industry as a panelist with many distinguished associates to present agricultural practices in four locations in China. In 1993, he was honored as Livestock Man of the Year by the 12th district Agricultural Association’s Board of Directors of the Redwood Empire Fair.
In 2001, Mr. Phillips and his wife moved to Redwood Valley, California. He continued in his community by serving as a Director of the Mendocino County Farm Supply Company, a Director of the Community Concert Association in Ukiah, a Director on the Endowment Committee of the Sun House Museum and his continued service in Rotary. The Ukiah Rotary Club recently honored him for his 53 years of service to the organization. He was Paul Harris Fellow of Rotary International.
Ed is survived by his wife Joan, daughters Sarah Scheuber (Mike) of Hughson, CA, Susan Kilmer of Troutville, VA, Shirley Pearson of Bozeman, MT, Karen Phillips of Corvallis, OR, daughter-in-law Katharine Phillips of Grants Pass, OR, grandchildren Matt Scheuber (Sephra), Riley Scheuber, Taylor Scheuber, Julia Kilmer, Chad Owen, Ashley Owen, Anna Pearson, Phillip Pearson, Kasey Phillips, Kane Phillips and great grandchild Tristan Owen. He was preceded in death by his son Ken Phillips 07/31/1998 and son-in-law David Kilmer 05/28/2013.
A celebration of Ed’s life will be held at Barra Winery, 7051 N. State Street, Redwood Valley on Saturday, September 24th 2016 from 1:00 to 4:00 p.m.
Contributions may be made in his memory to Phoenix Certified Hospice of Mendocino County, the Redwood Valley Volunteer Fire Department or the Sun House Museum.

To order memorial trees or send flowers to the family in memory of Phillips, Edwin McCreary, please visit our flower store.