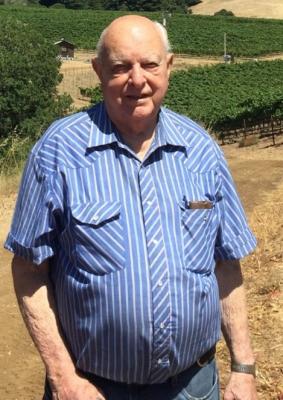 Visitation Information:
Graveside services for Johnnie B. Pinoli of Philo will be held on Wednesday, February 2nd,
1:00 pm at Evergreen Cemetery in Boonville. Johnnie passed away at Ukiah Adventist Hospital on January 27th, 2022.

Obituary:
Born May 3, 1928, in San Francisco, California, to John E. and Claudina M. Pinoli. Johnnie was raised in Anderson Valley on his parents’ farm/vineyard at Lazy Creek. Johnnie’s humble upbringing taught him the importance of family, hard-work, and a dash of frugalness. Johnnie worked in his parents’ vineyard as a child and when he was 14, he had a summer job hauling gravel to help resurface sections of State Route 128. After graduating Anderson Valley High School, at the request of his mother, Johnnie set-off to become a pharmacist. After a couple short weeks away at college, Johnnie decided to leave school; buy a pair of work boots, and return to Anderson Valley to work in the lumber mills. Shortly thereafter, Johnnie married the love his life, Thelma Salatena. Together they made Philo their home and raised their family. In the 1950’s, Johnnie began a career with the Department of Transportation, Division of Highways (CalTrans) until his retirement. Johnnie could always be counted on to help his family and members of the community. Johnnie was a loyal friend to the late Stanley Johnson and for many years helped Stanley caretake his ranch in Philo. Johnnie served his community by volunteering for over twenty years as a firefighter with the Anderson Valley Volunteer Fire Department. Johnnie was an avid hunter and fisherman. Some of his fondest memories were hunting trips with his son Robert. Johnnie was very sentimental and enjoyed telling stories about what he called the “olden days”. Recently, Johnnie was able to relate many of those stories about the “olden days” as he enjoyed a drive through Anderson Valley with his son Robert, grandson’s Robert Jason and John in what was his parents 1956 Ford, that John recently restored. Johnnie will be remembered for his steadfast-no-nonsense personality, kindness, loyalty, honesty, and devotion to his family.
Johnnie is survived by sister Julia Gromo, his daughter Linda Lynch and husband Mike, son Robert Pinoli and wife Cecilia, grandchildren David Lynch and wife Elizabeth, James Lynch and wife Jennifer, Robert Jason Pinoli and husband Mark Mendenhall, John Pinoli and wife Krista, and five great-grandchildren.
Johnnie was preceded in death by his wife of 57 years, Thelma, and his parents John E. and Claudina M. Pinoli.
Many thanks to Dr. Mark Apfel, Judy Nelson, Anderson Valley Health Center, Anderson Valley Fire Department and Anderson Valley Ambulance.
Memorial contributions to the Anderson Valley Fire Department and Anderson Valley Ambulance are preferred. P O Box 398 Boonville, CA 95415

To order memorial trees or send flowers to the family in memory of Pinoli, Johnnie B., please visit our flower store.