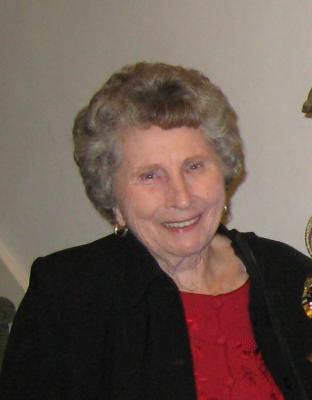 Obituary:
Betty J. Smith Pronsolino
Betty passed away early Sunday morning, March 19, 2017 at Holy Spirit Residential Care in Ukiah. She was born August 23, 1928 in Klamath Falls, OR. She was raised in Boonville where she met her husband of 61 years Guido. They married April 4, 1948 and had their son Ron in 1950, daughter Janice in 1954 and son Guy in 1957. Betty was a Mom first but worked alongside Guido on their ranch in Yorkville raising sheep, cattle and Christmas trees. She always had a huge vegetable garden every year, canning everything they grew as well as many varieties of fruits and berries they raised. She was famous for her Apple Pies that she took to many Auction Fundraisers and potlucks. Thankfully she taught her Daughter, Daughter-in-laws then Granddaughters to make her pies, so her legacy will continue.
Betty was a founding member of the California Wool Growers Auxiliary "The Bo-Peeps" in Mendocino County. She was a Cub Scout Den Mother, Bluebirds Leader, 4-H Mom and for many years a Room Mother at her children's school.
She is survived by her Children; Ron (Jennifer), Yorkville, Janice, Ukiah and Guy (Sandy), Philo. Grandchildren; Kristopher (Kayla) Pronsolino, Willows, Vanessa (Steven) Spacek Gualala, Russell Pronsolino, Philo, Marchella (Bobby)Norris, Eureka, and 9 Great Grandchildren, Harrison Norris, August & Jack Spacek, Shawnee Norris, Everett & Stuart Spacek, Hunter Norris, Charlotte & Josephine Pronsolino.
At her request, no services will be held. A private family burial will be held at a later date.
In Memory of Betty, donations may be made to Anderson Valley Senior Center, P O Box 591, Boonville, CA 95415, Anderson Valley Animal Rescue, P O Box 188, Boonville, or Yorkville Fire Department, P O Box 398, Boonville.

To order memorial trees or send flowers to the family in memory of Pronsolino, Betty J. Smith, please visit our flower store.