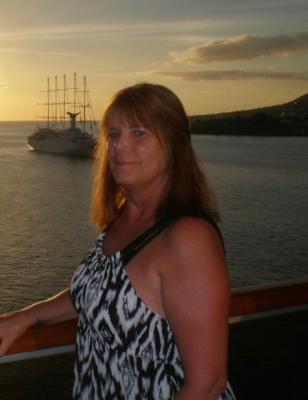 Obituary:
Sandra Kaye Pronsolino was born in Ukiah, CA June 28, 1958. She entered Heavens’ gates on December 18, 2017 at her home in Philo, CA.
Sandy grew up and lived in Calpella until she met and married her husband Guy Pronsolino, May 15, 1982. They then settled in Anderson Valley where Sandy had become a well-known member of the community.
Sandy loved the outdoors. On any occasion you could find her in her garden, camping, hunting, hiking, mushrooming, and just enjoying the life around her. The love that she had for her family was deep. Ask her, and she would say her greatest accomplishments were her marriage of 35 years to her husband, her two children, and her precious grandchildren. Sandy loved to cook and can. She could light up a room with her presence and be that bright light on someone’s darkest day.
One of her greatest accomplishments was accepting the MAME(Marketing and Merchandising Excellence) Award on behalf of Taylor Roberts during her career with them. She was currently working as a Senior Park Aide for the State Parks of California. She enjoyed her summers helping families make memories, which to her was the most important part of life.
Sandy is survived by her husband Guy Pronsolino. Son, Russell Pronsolino and Katie Sullivan. Daughter and son in-law, Marchella and Bob Norris. Grandchildren, Robert, Shawnee and Hunter Norris. Father Buhl Hoover. Brother, Randy and Nancy Hoover. Sister in-law, Janice Pronsolino. Brother in-law, Ron and Jennifer Pronsolino. Also survived by a large, loving extended family and friends. She is preceded in death by her mother Lorraine Hoover and her father and mother in-law Guido and Betty Pronsolino.
A viewing will be held at Eversole Mortuary, Wednesday, December 27 from 4pm-8pm. Services will be held on Thursday, December 28 at 11am at Eversole Mortuary with a reception to follow at Barra of Mendocino in Redwood Valley.
“Life isn’t about waiting for the storm to pass… it’s about learning to dance in the rain.”

To order memorial trees or send flowers to the family in memory of Pronsolino, Sandra Kaye, please visit our flower store.