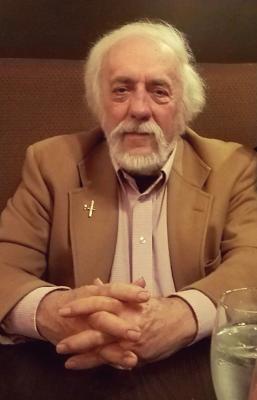 Obituary:
Charles Perry Ross, known most often as "Chip," was born on February 11, 1945 in Baltimore, Maryland and passed away November 13, 2019. He lived in the Ukiah Valley area since 1980, having moved here from Humboldt County. Chip is survived by his daughter, Elise Jones, son-in-law, Ernest Jones, and grandson, Charles Jones. He was a loving, kind, and generous father and grandfather.

Chip was a true Renaissance man and self-taught genius. He attended Boys Latin Preparatory School in Maryland but his education really began with his explorations of the shipyards, junkyards, and factories of Baltimore. This fascination developed into a lifetime hobby of collecting and restoring cars (Corvettes), antique gas pumps, toy steamboats, coins, and many other things from years’ past. He was a well-known personality at car shows and auctions, where he developed his business, “Corvette Parts and Pieces,” and shared his experience, benefiting many other car lovers.

When Corvettes didn't go fast enough for Chip, he took up flying. Airplanes were a passion of his and he studied hard and logged many flight hours until he received his pilot's license. He loved being above the Ukiah Valley in a little private plane, soaring high and free.

Chip loved learning about both modern American and world history, especially the Civil War, WWI, and WWII. The History Channel was one of his favorite television choices. Chip studied films, too, and loved the old black and white classics. He could tell, from seeing a few frames, which film was playing, who the actors were, the plot line, and often the year released.

Always disciplined and hardworking, Chip was constantly involved in improving and developing his properties. He mastered all the arts of construction and woodworking and remodeled many homes. Chip created many lovely living spaces for his friends and family.

Most importantly, Charles Ross was a loyal and devoted friend and father. His generosity was without limit and he often extended himself to help out someone in need. He was the friend who would show up, tools in his truck, to fix a flat tire, charge a dead battery, or even replace a broken water heater or fix an electrical problem. He also donated to Plow Shares every holiday season and was known to pass out five dollar bills to the homeless.

The real joy in Chip's life was his daughter, Elise. Chip became Elise’s godfather when she was very young and eventually adopted her. Chip would prepare special fancy dinners for his "princess” and play all the roles from chef to server to gentleman companion. He was there for school projects and special requests, like making doll furniture and sewing “elf slippers.” Chip was always there to offer a wise perspective and much-needed advice. Chip was so proud of Elise's academic achievements and encouraged and supported her through college and into a successful career as a mental health professional.
In 2017, the family welcomed the birth of Chip’s grandson, Charles. Chip anticipated sharing many more "toys" with Charles, and even had a child-sized car stored for the time he will be big enough to reach the pedals. His generosity and love for his daughter and grandson is a legacy that will be carried on.

We mourn Chip's untimely departure, and believe he is watching over his grandson and daughter from the Spirit side. Rest in Peace, you wonderful man! Thank you deeply and dearly for all you have given us while you were here on Earth.

To order memorial trees or send flowers to the family in memory of Ross, Charles Perry "Chip", please visit our flower store.