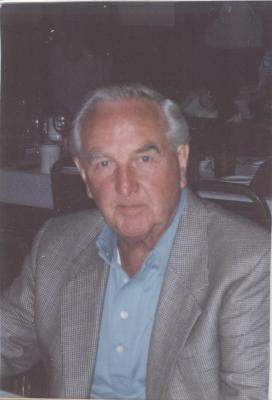 Obituary:
FLOYD A. ROSS JR.
Longtime banker and Ukiah resident, Floyd A. Ross, Jr. was a loving husband, father and grandfather, and a good friend to many. Sometimes stern, but more often warmhearted and generous, with a sharp wit and a great sense of humor, his integrity both as a banker and man served him well during the course of a very busy and full life. Born in Sacramento on October 17, 1932, he moved to Ukiah in 1935, graduated with his classmates in 1950 from Ukiah High School and attended many banking schools too many to mention. He served our country in the US Navy from 1951 to 1955, and started his 64 year career as a banker in 1949, where he was well-loved and very popular with the employees. His roles through the years were many, serving as the Executive Vice President/CAO, Chairman of the Board and as a Director for the Savings Bank of Mendocino County. During the course of his career, he was the President of the Independent Bankers of Northern CA in 1984 and also served as a Director of the Western Independent Bankers, and the California Bankers Association, Region 8. He enjoyed participating on many boards in the community, as well.
Floyd also valued his many friends and his hunting endeavors, as well as working hard to support the Ducks Unlimited and Ukiah High School Booster Club and Alumni Association for many years.
Most of all, Floyd Ross loved his family. He leaves his much loved wife Patricia and their son and daughter, John Ross (Joan) and Connie Ross (Steve Steinberg). His grandchildren were very special to him as well: Malorie Ross, Matthew Ross and Noelle Steinberg. He also leaves a sister, Mildred Sanchez. He was preceded in death by his father and mother, Floyd Ross Sr. and Lily Ross and his brother, John Ross.
Floyd Ross died with his hunting boots on doing what he loved best hunting with his dear friends on August 22, 2014.
In lieu of flowers, the family requests that you please donate to your favorite charity or to the Ukiah Hospice or Ducks Unlimited.
A celebration of his life will be held at the Ukiah Elks Lodge on September 6, 2014 at 11:00 a.m.
Eversole Mortuary is in charge of arrangements.


To order memorial trees or send flowers to the family in memory of Ross Jr., Floyd A., please visit our flower store.