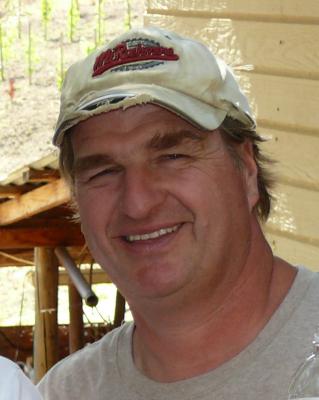 Obituary:
Robert F. Rupe passed away on Friday May 8, 2015 in Ukiah, California at the age of 58. Bob was born on May 23rd, 1956 in Ukiah, California to Francis and Della Rupe. He graduated from high school in 1974 and joined the US Army and was stationed in Ft. Richardson, Alaska. After his tour of duty was up, Bob’s love of the outdoors led him to remain in Alaska another three years before he returned to his hometown of Ukiah. Many a night he captivated us with stories of King, Nutting, Kissler and Johnson – his Army buddies who’s first names were all Robert -and adventures in Dutch Harbor on an Alaskan crab processor.
Many fondly remember him as the smiling face of Alex Thomas Packing Shed where he was the manager for over 20 years, giving many people their first job. He was instrumental in setting up a million dollar pear program with COSTCO. He also incented the workers to “pack out” the most A grade pears and rewarded them $10 at each shift when they were successful, still netting an increased profit for the company. He was an amazing man. He was insightful. Kind. Easygoing. He loved his family, community, a good story, good food, a good time. He always had a smile, a wave and a good word for everyone.
He will be loved and missed, especially by his wife Patricia, and daughter Allison Rupe, his sister Cathy Pacini along with her husband Alec Pacini and nephews Nick Pacini and Tyler Pacini, his brother Glenn Rupe along with his wife Sue and niece Rebecca Rupe, brother and sister-in-law Ed and Jo-An Jones, niece Tawni Ward, nephew Marty Ward and wife Dawn their son Gabe. He is preceded in death by his parents Francis and Della Rupe, along with step son Patrick Crosiar.
A Celebration of Life will be held on Sunday, May 31st, 2015 at the Potter Valley Rodeo Grounds on Main Street downtown Potter Valley, beginning at 1:00pm. Please come join us and share in some great food, and good memories of a wonderful man. If you would like to send a story or picture of Bob to be printed and shared at the memorial please send to: patrupe@rocketmail.com.

To order memorial trees or send flowers to the family in memory of Rupe, Robert F., please visit our flower store.