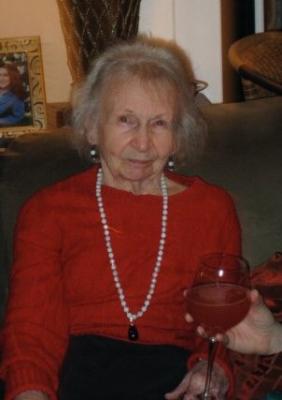 Obituary:
Norma Jane Sack of Ukiah passed away on February 18, 2021, at the age of 97. She suffered from complications of COVID and pneumonia.
Norma was born and grew up in San Diego. In high school, she was a member of the tumbling team and drill team.
She met John Sack, who was in the service; they married in 1941.
She lived in San Diego on a street with many young military families. Norma said the military wives would do their housework in the morning and often get together with each other in the afternoon for tea and visiting, while their husbands were at war.
They would cringe when they saw the military jeep in the neighborhood. It meant that they were informing a family that their loved one had been killed in battle. They would peek out the window and pray the chaplain’s jeep would not stop at any of their homes.
She recalled; San Diego periodically would receive air raid blackouts during the war. This was when all the lights in the city were to be turned out because of a threat of an attack by Japanese planes. It was frightening being all alone while her husband was at war.
Norma and John lived in San Diego and eventually moved to the family’s Potter Valley ranch in 1954, after the death of John’s father, Edmund Sack.
Norma was a city girl who moved to the country. She was not fond of the move, but adapted well to country life. She soon found herself tending to animals—feeding chickens, milking the cow, and helping her boys load up the 4-H herd to haul to the fairs.
While she missed the city life, she was fond of the beauty of the country.
She and John were married for 34 years until a summertime motorcycle ride changed her life. From that accident, she lost a husband, her leg and sustained several other injuries. Although she lost her “Johnnie” that night, he remained her true love for the remainder of her life.
Until that ride, she was proud of her gymnastic skills. She could do headstands and other gymnastic moves. Though she would never do those moves again, her athleticism and determination would prove to be a valuable asset in life’s challenges ahead.
She faced the life ahead with many obstacles and few complaints. She helped raise granddaughters, Johnna and Deanna, by taking care of them each day, driving them to school, cheerleading and athletic practices. They were incredibly close.
As a mother, she did her share of preaching, but mostly emulated by doing good deeds to help others. “Do unto others, as you would have them do unto you,” she would say.
Often, there was an elderly person who could no longer drive that Norma would take to the grocery store each week, so they could get out and be independent.
She advocated to take in a teenager so that he could graduate with his class from Potter Valley High School, instead of having to move away.
She anonymously gave Christmas gifts to families who were having financially difficult times.
She loved children and helped others by watching their babies or toddlers.
On challenging days, she often quoted from a poem that her grandmother had recited.
“It is easy enough to be pleasant,
When life flows by like a song,
But the person worthwhile is one who will smile,
When everything goes dead wrong.”
Norma had five children; Stephen, died shortly after childbirth.
She is survived by children; John Sack, Jr. of Novato, Sandy (aka Joan) Venable of San Diego, Robert Sack of Ukiah, Gary Sack (Yvette) of Elk Grove.
Grandchildren: Shawn Sack, Rachelle Sack Copsey, Ryan Sack, Johnna Sack Jimenez, Deanna Sack Crudo, and nine great-grandchildren all of whom she was proud and loved.
She is also survived by her sister. Verna Holmes-Hollaway of Poway.
She was preceded in death by her husband, John Edmund Sack; son, Stephen; sister Billie Collette; mother, Mary Holmes; and father, Willard "Bill” Holmes.
Graveside Service will be at the Potter Valley Cemetery, Saturday, February 27 at 1:00 PM.
Donations in Norma’s memory can be made to the Potter Valley Fire Department, PO Box 46, Potter Valley, CA 95469.

To order memorial trees or send flowers to the family in memory of Sack, Norma Jane, please visit our flower store.