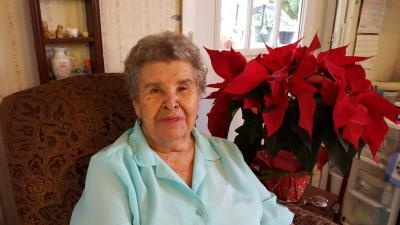 Obituary:
Maria Sanchez “Ama"
Her life as I knew it
Forward: This is a short version of what I remember from what was told me by both mom and dad. If it is different than what one of my family remembers I stand corrected.
Our mother born Maria Vasquez on August 23, 1923 to father Innocencio Vasquez mother Alberta Ramirez Vasquez. In the small Mexican village of El Josefino de Allende in the state of Jalisco. She told me she was born in a little rock hovel on their ranch called “La Loma".
She was one of seven children, Concha, Guadalupe “Lupe", Jesus, Maria, Josefina, Jose and Juan.
Note: they all preceded her in death.
Her early memories are of working barefooted in fields, shoes were only for going to school or church. Life was simple but hard, doing laundry and bathing in the river, no electricity or running water. Even in the village.
Now comes the hard part… Jose and Mary “Marica"have a more complete version but here is mine. Exact date and times am not totally sure so I will only guess or leave out all together.
My mom and dad married around 1940, Jose our oldest brother was born in 1941 on our dads folks ranch call “El Palo Colorado “.
Ester who passed before the age of two and Maria de La Luz “Marica" I believe were born in El Josefino. Our dad besides working in the field’s made a living making “Carbon" for starting fires, hauling it by donkey to the nearby town of Arandas to sell.
Looking for a better life for his family, being young and only in his twenties he came to the USA via the Bracero Program. To work as a field hand. He related to me that the Rancher he worked for kept him in debt by overcharging him for food and rent, so one day a friend gave him a bag of grapefruit and he left during the night living on grapefruit for five days.
He eventually ended up in El Paso Tx. Landing a job as a laborer with the Southern Pacific Railroad, “SP". He soon returned to Mexico for his family, bringing then to the USA. Out of concern for her health they left Marica in the care of moms family. During their time in El Paso mom bore our brother Guadalupe “Lupe". After some time they once again returned to Mexico for a time.
Once again dad ventured out looking for a better way, and returned to the states to work for the Railroad, this time for the Northwestern Pacific Railroad owned by the “Ole SP" landing in a little farm community know as Redwood Valley.
Once established he once again returned to Mexico, unable to obtain proper paperwork he return only with mom, jose and lupe in tow to Redwood Valley. To live in the railroad shanties by the tracks on Laughlin Way. I soon arrived in April of 1949, followed by Consuelo “Chella" and Marselina “Nina”. We spent some five years there, some of our first photos are from there. I have memories of Laughlin, playing near the tracks, the engineers, brakeman and conductors even started throwing candy out the windows to us. I remember moms tortillas, trading in my baby-bottle for a bottle of Coca Cola.
Not realizing that when I turned twenty I would go to work for the Railroad and work with the people who had tossed us candy.
When I was nearing five years old our dad quit the railroad and went to work at a mill, Hollow Tree Lumber Company. So he relocated us to the Smith Ranch off of UVA Drive in Redwood Valley to help care take the ranch.
Mom worked hard in the vineyards and orchards and as we grew we to worked the ranch. Even thou we worked hard we still found time to hunt and fish the nearby creeks and streams. During this period mom and dad saved and finally got the proper paper work to return to Mexico for our sister Marica, now thirteen years old.
Mr Smith the owner of the ranch soon died of injuries sustained in a car accident. So the ranch was eventually sold to one Barney Fetzer, we continued on living in what was even years after we moved called the “Sanchez House". We grew up with the Fetzer children, Kathy, John, Joe, Jimmy, Bobby and Richard are the ones I remember. There Fetzer Wines was established.
Once again mom and dad expanded their horizons and bought an acre on Colony Drive, for around a thousand dollars. It had one scraggly tree and a run down small house on the property. Thru years of planting trees, shrubs, flowers, fish ponds, aviaries they developed the place into a little oasis. So beautiful that weddings, Anniversary parties, birthday parties and such were held there any reason was a good reason to celebrate.

Mom continued to work hard and even landed a job at Little Lake Industry’s in Willits even though she did not drive. Eventually at age fifty-four she learned to drive and got her license. She worked there for seventeen years until our father was diagnosed with ALS. So she quit to come home and care for him. He lasted four years passing in April of 1987, not quite sixty-eight years old.
It was during our years at Colony Drive that we all started to leave the nest to establish our own families, always knowing that we had a safe haven at our mommas green acre. They helped us get started if only to babysit, or let us stay for awhile, she turned away no one, always something to eat, especially her delicious tortillas, also she was an awesome cook.
She was loved by all, she leaves behind four generation of children, grandchildren, great grandchildren and even great-great grandchildren. She will be sorely missed despite her rough edges, she loved a good laugh, kept her sharp wit almost to the end. Passing peacefully with family by her side.
Adios Ama, te Quiero Mucho, tu hijo Carlos

To order memorial trees or send flowers to the family in memory of Sanchez, Maria "Ama" Vasquez, please visit our flower store.