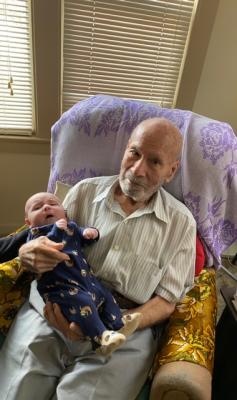 Obituary:
Juan Saucedo was a simple man that lived a simple life and passed on to be with his maker in a quiet passing on October 11, 2020.
But don’t think his humble beginning and end determined the rest of his life. Juan was born in a small rancho in the Mexico State of Jalisco on July 5, 1931. The name of the ranch was Sal Si Puedes, and get out he did.
Juan immigrated to the United States at the age of 31 and settled in Fort Bragg, where he worked for Georgia Pacific. At the age of 33 he was joined by his wife Elvira, who was with him for 62 years, until his passing.
Juan enjoyed a career of 25+ years at Georgia Pacific, while raising his family and being part of the community.
Juan raised a total of 4 boys and 1 girl. One of his sons, Onesimo, sadly predeceased him in 2002, but his other children are still with him.
He is survived by his daughter Emma of Redwood Valley, and his sons: Erasmo of Charlotte, NC; Dagoberto of Denver, CO; and Alberto of Santa Rosa, CA. Juan is also survived by 5 grandchildren: Samuel, Marisa, and Lorena of Ukiah; and Alyssa and Kyle of Denver, CO. Lastly, he is survived by a great grandson, who he only knew for less than one year: Mateo Onesimo Saucedo.
During his life, Juan worked hard to support his family, was an avid gardener, and a doting grandfather. He was also a skilled carpenter who, with the help of his boys, built 2 homes for his familia.
And so, while the beginning and end of his life may have been quiet and simple, the middle of his life was rich and rewarding.


To order memorial trees or send flowers to the family in memory of Saucedo, Juan, please visit our flower store.