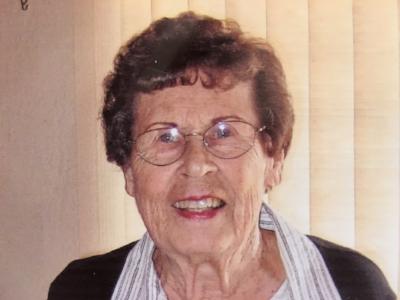 Dottie, as she was fondly called, was born in Inglewood, California on July 18, 1929 to Mr. and Mrs. James Potts, and stayed in Southern California until the family relocated to Potter Valley, where Dorothy attended her senior year and graduated from Potter Valley High School. Dorothy continued to live in Potter Valley, ultimately marrying the love of her life, James T. Schurr. They both worked at the Potter Valley Store until they founded a successful meat cutting business in Potter Valley, Schurr's Custom Meats, which they owned for a number of years and then sold to Paul and Jennifer Warden.

Mrs. Schurr also worked at the Potter Valley Unified Schools where she fully enjoyed the time with the students. Once Dorothy and James retired, they continued to ranch cattle and sheep and enjoy their children and grandchildren. Dorothy was warmhearted, and active with her grandchildren, keeping up with them regularly as they grew up. She was also passionate about her vegetable garden, enjoyed sewing and crocheting, and working in the garden every Spring. She devoted much of her time being a caregiver to her family members, and nursed her husband until he passed away two and a half years ago.

She was preceded in death by her beloved husband, James T. Schurr. Dorothy was particularly fond of the Potter Valley Fire Department, and requested that donations be sent to them in lieu of flowers. The family wishes to express their gratitude to the very special caregivers who assisted her, as well as to the DIC Dialysis Center and Ukiah Hospice.

At her request, there is to be no service. Eversole Mortuary is in charge of arrangements.

To order memorial trees or send flowers to the family in memory of Schurr, Dorothy June, please visit our flower store.