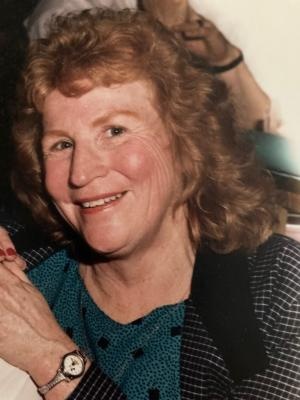 Obituary:
Easter (Toby) Lorene Schwartz was born 12/13/1935 to Thomas and Lillian Dunigan in Fresno, CA. She was the only daughter and second to the youngest of four brothers. Easter was raised around agriculture and learned too quickly how to earn a living and never stopped. Her first marriage was to Doyle McCracken in 1953 but soon dissolved in 1955. Six years later she married Robert ‘Bob’ Hamby in 1961 and remained together until his death in 1982. Six years later she met and married Richard ‘Dick’ Schwartz. This was the beginning of the most happy times of her life. During their years together they were able to travel and see many of the fascinating sites in the U.S as well as golf on different greens in golfing tournaments. Of these travels her favorite of all were all along the west coast where they did camping with the Wapitis group, clam digging, seashell finds and just walking along the seashore. Whenever she heard someone going to the beach she always began to tell her stories and experiences of the west coast beaches. It was the highlight of her day as well as ours as it really brightened her smile. Another one of her favorite travels was to the Dakotas where Dick was from. After meeting his family she immediately became very close to them especially his sister, Carole Fust. The two of them remained in close contact up to her passing. Years of being with Dick and getting to know dear friends along the way were the most memorable and happiest times of her life. Dick died in 2016.

Easter was extremely creative and crafted many skills such as cooking, sewing, canning and even a hairdresser. I can remember the ladies lining up at our house to have her put their hair up in a “French Twist” which was quite popular at the time. She loved to craft and was always on the lookout for crafting ideas and supplies. Her favorite things to create were Christmas Wreaths where she would gift them to friends. But most of all she loved to cook for Dick as he never ceased to praise and boast over her fine cuisine. She could turn an ordinary soup into a gourmet meal. This led her to share her skills when she was asked to cook at the Ukiah Elk’s Lodge. I felt very honored to be able to help her when she cooked up some yummy Wednesday lunches there. She was very proud of her cooking and rightfully so. She continued this until she became ill.

She will always be remembered by her gorgeous green eyes, vivid red hair, a sassy wit and love for animals. She loved to create, golf, see family gatherings, care for the wildlife, have fun, go to the beach and travel with her best person, her beloved husband, Dick. Easter was a friend to all and was known for her bubbly and happy-go-lucky spirit. Her hint of sparkling sarcasm could light up a room with loving laughter. She will be greatly missed.

Easter died 1/12/2021 at 85 of various health related issues including osteoporosis, dementia and pleural effusion. At her request, there will be no funeral or memorial services. Instead, she asked that friends and loved ones to visit the ocean when they are able. When you see the highest wave soaring, she will be there. She can be visited at her niche at Evergreen Memorial Gardens in Ukiah between 9:00 am and 5:00 pm.


To order memorial trees or send flowers to the family in memory of Schwartz, Easter (Toby) Lorene, please visit our flower store.