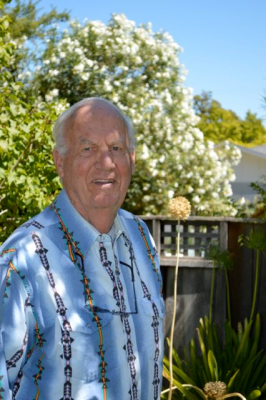 Obituary:
John Ruby George Simmons, loving father of John R.G. Simmons (Dee Simmons) and Tracy Lee Simmons, loving husband to Loisjean Raymond Simmons, and uncle to Kim Franklin, great uncle to Seth and Kayla Franklin, peacefully passed away Sunday, September 16, 2018. Born on June 23, 1929, John was 89.
John was a graduate of Albany High School in Albany, Oregon and a college graduate with two Master’s Degrees from Oregon State University, Corvallis, Oregon. He served in the U.S. Army, stationed at the Presidio, San Francisco, CA.
On November 26, 1949, John married his lovely Lady Jane. They were married just shy of 62 years as Lady Jane passed away just five days before their 62nd wedding anniversary.
John found love again and married Loisjean Raymond on August 12, 2011. He became the father to five stepchildren: Jennifer, Steve, Mark, Patrick and Christopher Raymond and the step-grandfather to ten grandchildren.
Being an educator was John’s passion. He began as an industrial arts teacher at various schools and then worked in school administration as principal of Peter Lassen Junior High School, Sacramento, CA and where he was the school district’s Principal of the Year his first year. He then became Superintendent of Mendocino Unified School District, Mendocino, CA. After four years in Mendocino, he was off to a new position in Ukiah, CA as the Director of Special Projects for Ukiah Unified School District. Next he became the Coordinator of Title VII, Native American/Bilingual Program for the Mendocino County Office of Education, and then came out of retirement to be the interim Superintendent of Leggett Unified School District, Leggett, CA.
John was initiated as an Entered Apprentice: August 25, 1950 in Three Pillars Lodge No. 613 Sacramento, CA and passed to the Degree of Fellow Craft: October 17, 1950 in Three Pillars Lodge No. 613 Sacramento, CA, then raised to Master Mason on December 1, 1950 in Three Pillars Lodge No. 613 Sacramento, CA. He was also affiliated with Mendocino Lodge No. 179 on June 12, 1974 and was a current member, a member of the Pomo Shrine Club in Ukiah, CA, Scottish Rite and he was the Potentate for the AAHMES Shriners in the year 2000. “May you always walk in the SUNSHINE.”
Throughout John’s life, he was a man of service to others, never asking for anything in return. He made it a priority to make sure everyone else was taken care and had what they needed in any circumstance. He touched the lives of so many whether he knew them for a lifetime or met them only once. We are so proud to call John our father, our friend.
There will be a celebration of John’s life on Saturday, October 20, 2018, beginning at 1:00 p.m. at the Lake Mendocino Clubhouse.
The family asks that in the lieu of flowers, please feel free to make a donation to the Shriners Hospital in Sacramento in honor of John Simmons, Past Potentate, AAHMES Shriners. Shriners Hospitals for Children, Northern California, Attn.: Development, 2425 Stockton Blvd., Sacramento, CA 95817.

To order memorial trees or send flowers to the family in memory of Simmons, John, please visit our flower store.