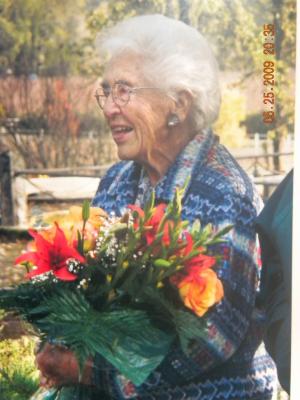 Obituary:
Esther M. Smith, 95, of Potter Valley, passed away at her home on Monday, August 29, 2016 with her family by her side. Born March 6, 1921 in Strathmore, CA, she graduated from Lower Lake High School in 1934. Esther worked and attended business school in Portland, Ore before moving to San Francisco. It was in San Francisco that Esther met and married her husband of 27 years, Delbert, in 1942. She came to Potter Valley in 1943 with her infant daughter and parents. Following WWII, Esther and Delbert homesteaded in Tulelake, CA before returning to Potter Valley. During her employment years, Esther was a telephone switchboard operator, rural route mail carrier, clerk at the Potter Valley Post Office, and bookkeeper for two Potter Valley logging companies. After she retired, Esther visited Alaska, New Zealand, Germany, and Canada to name just a few of the places she travelled to. Her last trip was to Scotland to see the family castle with 4 other family members. When she wasn’t hanging out in airports, Esther enjoyed gardening, tending the ranch, raising and watching her herd of Red Angus cattle. Esther worked tirelessly as a volunteer Trustee for the Potter Valley Cemetery and was instrumental in founding the “Circle of Flags” commemorating veterans each Memorial Day. Truly a gracious and kind lady, Esther is survived by daughter Karen Riordan and husband John, of Potter Valley daughter, Lura Smith, of Potter Valley, niece, Pamela Lee, of Pleasant Hill, as well as numerous other nieces and nephews. A special thank you to Esther’s two care providers, Atanasia Muatabu and Mariana Mafi for their selfless and tender care. She is preceded in death by her husband, Delbert W. Smith. In lieu of flowers or other donations, memorial donations may be made to Potter Valley Cemetery or Potter Valley Volunteer Fire Department. Graveside services will be held on Sunday, October 2, 2016 at 1:00 pm at Potter Valley Cemetery. A Celebration of Life will follow at the Potter Valley Firehouse.


To order memorial trees or send flowers to the family in memory of Smith, Esther M., please visit our flower store.