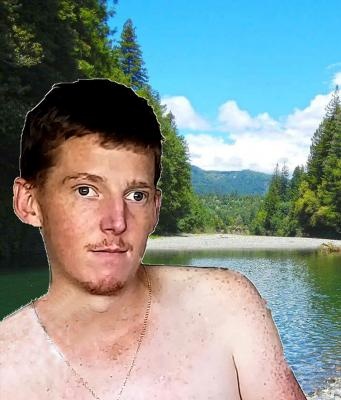 Obituary:
Frankie passed away August 15th, 2018, in Ukiah, of a heart –related illness. He is survived by his loving, devoted mother Melissa, from Carlotta, his father, Jimmy Shea, from Weitchpec, and his stepfather, Ed Cushing, from Hydesville. Also mourning Frankie are his grandfather Stan Stansberry, of Fairfield Iowa, grandmother Kathleen Nolan, of Monterey, Aunt Jeanine Walters & husband Lee Ortega of Santa Barbara, Cousins Corey and Sienna Walters, Aunt Emily Stansberry, & husband Reza of British Columbia, Cousins Lila and Sollie Mohammed, Uncle Emmett Nolan & wife Melissa of Lafayette, Cousins Thomas, Liam, and Lillie, and Uncle Emile Stansberry, Uncle Paul Nolan, and loving Shea relatives in Oklahoma. Frankie will miss his dog Maggie “vish-vish”, and she will miss him.
Franklyn Allesandro Stansberry-Shea was a self-described “Humco kind of guy”, through and through: conceived in Weitchpec, born July 21st, 1993 in Arcata, lived in Trinidad, and grew up in Carlotta with his mother on a peaceful mountain property covered with wild berries and a lush garden, with the Van Duzen River a short walk from his back yard. Born to Melissa Stansberry, a greeting card designer, and Jimmy “Breeze” Shea, a forest worker, Frankie grew up swimming, hiking, hunting, fishing, and camping. Summer afternoons on the river bar skipping rocks and watching for deer were his life, as a boy. He picked blackberries for his mother’s jam and sold her greeting cards for piggy bank funds.
An avid Harry Potter fan in those days, Frankie was also an actor in Summer Theater in Ferndale. He was beloved by family in Southern California beach towns, where he learned to body-surf and boogie board. He was preceded in death by his great-grandparents Virginia Nolan and Pearl and George Stansberry. As a teen, his life changed, and after several years of personal struggle, he embraced a healthy life, worked at the Woodrose Café in Garberville – a job that made him proud – and still passed away all too soon. Through the fellowship he enjoyed, Frankie made many close friends who will miss him dearly.
There will be a Celebration of Life at a later date.

To order memorial trees or send flowers to the family in memory of Stansberry-Shea, Franklyn Allessandro, please visit our flower store.