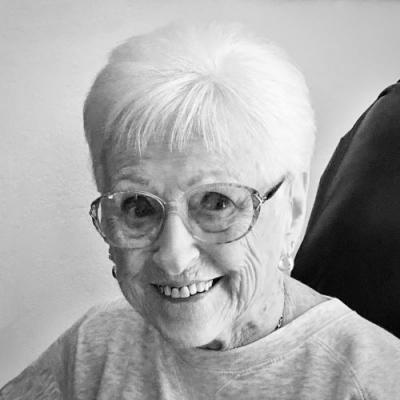 Obituary:
Frances Eland Starbird passed away peacefully with family by her side on July 24, 2020 at Dalistan Care Home at the age of 96.
Frances was born to Tom Eland Skinner and Lela Bell McDonald in Marysville, Kansas on November 27, 1923. She grew up in Dover, Kansas, roller skating on county roads she’d swept clean, and helping her mother run the town switchboard. She fell in love with her future husband, Wayne Starbird, while still in grade school, and watched him go off to war for two years just days after their wedding in 1944. Raised during the Great Depression and having weathered a war, the couple settled in Northern California, eventually landing in Ukiah where they opened a small grocery store called The Food Depot, raised four kids, and put down roots for the rest of their lives. In later life Frances became a fixture at PG&E after Wayne passed away in 1974. She always had an affinity for sporty little cars, racing between stop signs on Dora Street on her way to work, and she drove her little red Mustang through the streets of Ukiah well into her 90’s, making sure she was the first off the line when the light turned green! All told she spent 54 years in the little house on Lockwood Drive, only giving up living there a few years ago.
She is famous in her family for her tacos, her competitive nature when playing games, her teasing of those she likes, her piano playing, and her ability to overcome just about anything! She was an amazing woman and mother whose age was never a factor in anything she wanted to accomplish. Her family will lovingly carry her memory, and a bit of her tenacity, through their own lives.
She is survived by her children Lynn Starbird, Jim Starbird, Mark and Jeannie Starbird, and Tracy and Warren Aylworth. Grandchildren Tania Salas and Ailish Starbird Dean, Kevin and Carrie Starbird, Chris and Kristin Starbird, Alison and Jason Leras, Renée Aylworth, and Lauren and Austin Harpst. Great-grandchildren Tucker, Zoë, Gunnar, Colette, Cora and Paxton. A celebration of life will be arranged at a later date when family and friends can safely assemble. She will truly be missed.

To order memorial trees or send flowers to the family in memory of Starbird, Frances Eland, please visit our flower store.