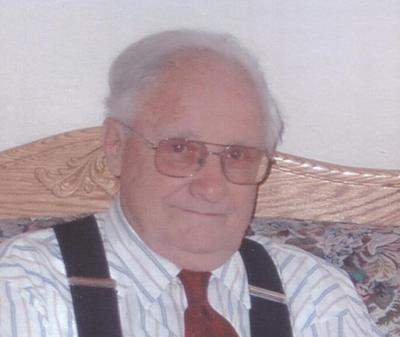 Obituary:
Henry John Steliga passed away peacefully Sunday, October 25, 2015 at Holy Spirit Care Home at the age of 91. Henry was born to Frank and Katherine Steliga on December 13, 1923 in Star Junction, PA. He was raised near Pittsburgh before joining the Air Force in WWII. He was stationed in Guam as a B-29 mechanic. Upon discharge in 1946 he resumed working at Westinghouse Airbrake. He married Lois Vejvoda in 1949 before moving to Ukiah in 1952. Henry began work at Redwood Auto Supply cheerfully helping mechanics and do-it-yourselfers for almost 50 years. He enjoyed reading (nonfiction only) and his clear voice could be heard in numerous singing groups (Redwood Regionaires, Oratorio Society, Masterworks Chorale) among others. He was a faithful member of Faith Lutheran Church.
Henry is survived by his wife of 66 years, Lois, sons Greg and Glen (Jan), son-in-law Nenad Gojnic (Debbie), brother Barney of Pittsburgh, grandchildren Libby Bready (Sean) of Oregon, Kelly Steliga of Santa Rosa, Dale Schroeter (Jakob) of Switzerland, Jody Steliga of Denver, Drew Steliga of SF, Paul Steliga and Yovana Gojnic of Sacramento. He also leaves sister and brother-in-law George and Leila Bonner of New York, 16 nieces, 1 nephew and 3 great granddaughters. He was predeceased by daughter Marilyn Gojnic in 1983.
A memorial service will be held Sunday, November 1, 2015 at Faith Lutheran Church at 560 Park Blvd at 2 p.m.
Donations may be made to Faith Lutheran or a charity of your choice.
Eversole Mortuary is in charge of arrangements.


To order memorial trees or send flowers to the family in memory of Steliga, Henry John, please visit our flower store.