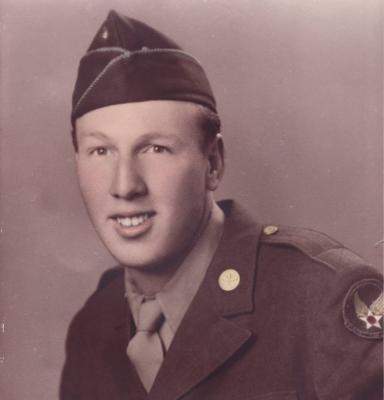 Obituary:
It is with deep sadness that we announce the passing of our dad Larry Alois Steppe in the morning of April 9TH…
All of us will experience loss during the course of our lives, but the death of a parent, a father can sometimes be a cut that is slow to heal. Our dad had been ill for some time, so we knew it was coming, but the knowledge of the inevitable sometimes provides little comfort. My sister and stepmom were at the foot of his bed when he peacefully passed away to a better place.
Dad was born on July 9th, 1924 in Marshfield Oregon. He was preceded in death by our mom Verleene along with his 5 brothers and a sister. He is survived by our stepmom and loving wife Lorraine of 25 years. His two children, Verl of Bend Oregon and Jennie of Castle Rock, Colorado. Grandchildren Brian and his wife Stephanie Steppe, Jamie and her husband Matt Carley, great grandchildren Ava & Addie Carley and Aubry Steppe expected to arrive with a due date of June 1st. stepchildren Raymond and his wife Tammy Tollini, Alvin and his wife Sally Tollini and Teresa Etter, 8 grandchildren and 12 great grandchildren.
Dad loved his family and later in life loved to just tinker around the house with his many cats and dogs. He was an accomplished golfer and loved to reminisce about his old golfing buddies Paul Underwood, Bill Clark and Jack Weggesser who have since passed on. Dad had to have catsup and vinegar on everything which would drive us all crazy. Dad loved the old style Country Music. At one time he owned a music store and was a DJ… known as “Merry Larry” at a radio station in Springville Utah. He had a real passion to travel. He would pack up Lorraine and his dogs in the RV and off they would go. There have been very few pew places that he and Lorraine hadn’t been or seen. Dad was a veteran of World War II serving at Hickam Field in Hawaii.
A private graveside service will be held at Ukiah Cemetery.
We will miss him…
.


To order memorial trees or send flowers to the family in memory of Steppe, Larry Alois, please visit our flower store.