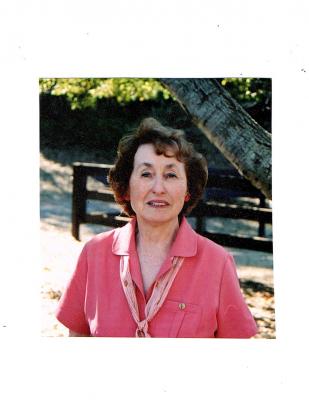 She received her Bachelor of Arts Degree in education with a minor in music from San Jose State in 1951 where she met and soon thereafter married Charles Elliott Stevens in 1951 in Santa Clara, CA.

Frances was a long time resident of Ukiah having moved there in September of 1969. Being outgoing, she made friends readily and became an active member of the Holy Trinity Episcopal Church for over 50 years where she was the organist for quite some time. Her passion was music and she loved playing the piano. Soon she became involved with the Ukiah Community Concert Association as a volunteer and board member. In 2010, she was presented with a “Lifetime Community Achievement Award in the Arts” from the City of Ukiah for her work in the Community Concert Association. She also educated many young school aged children at their homes when illnesses prevented them from attending local schools. Frances was also a den mother for the local cub scout pack. Proof she was a real trooper.

Some of her favorite places to be were back at the couples first home in Carmel, vacationing with the extended Stevens Family at Lake Tahoe and the family property on the Feather River.

She will always be remembered as a sweet, kind, loving, humorous, determined and dedicated person.

Frances was predeceased by her husband Charles in 2008, sister Anne Senter in 1994 and brother Carl Hoffmann in 2021.

A memorial service will be scheduled sometime in the near future.

A special thank you to Tima Vulawalu for her love and personal care of Frances in her last few years. She did an unbelievably hard job with grace and love. She will always be a big part of our family. Another special thank you to Jamie Lynne of Hospice of Ukiah for all the support they provided.

To order memorial trees or send flowers to the family in memory of Stevens, Frances Hoffmann, please visit our flower store.