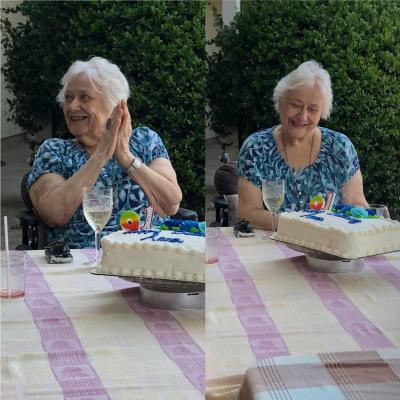 Obituary:
Anna Felicie Sullivan was born in Oakland, CA August 31, 1927. She entered Heavens’ gates March 15, 2019 at her home, surrounded by love and family.
Anna is survived by Son, Russell Shawn and Kathryn. Son, Kevin and Daughter in-law Donna. Niece, Donna Salazar and family. Grandchildren, Andrea and Patrick Manion, Erin and Chris Longo, and Katie and Rusty Pronsolino. Great Grandchildren, Emersyn, Mia, Riley, Brinley and Brayden. She is also survived by a large, loving extended family and friends. She is preceded in death by her Father and Mother, Pascal and Jeanne Bonne, sister Elizabeth Matthews and grandson Brian Sullivan.
Anna had a great love for her sons and family. On any occasion you could hear her telling stories of her sons, which in her eyes were her greatest accomplishments. The love that she had for her family was deep. Anna loved to cook, crochet and puzzle. Her cooking was enjoyed by many, she was best known for her roasted chicken, rabbit and mushroom risotto. She enjoyed trips to San Francisco with her Grandchildren when they were young, exploring Pier 39 and Fisherman’s Wharf. She also took several trips to France with her sister and Daughter in-law Donna, visiting where her family was from.
Anna cared for many people. She opened her home to family and friends whenever they needed a place to stay. Anna had a lasting impact on everyone she met and will be missed by all.
At Anna’s request, no services will be held. In lieu of flowers, donations can be made to Phoenix Hospice of Mendocino County.

To order memorial trees or send flowers to the family in memory of Sullivan, Anna Felicie, please visit our flower store.