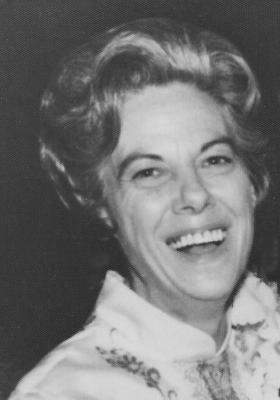 Obituary:
Alice Clare Swan passed away on June 10, 2016 at the age of 88. Her husband Robert Swan was at her side when she passed. She was born on June 29, 1927 to Clare Coombs and Pearl David Wilsey in Aberdeen, Washington and the family moved to Ukiah soon thereafter. Alice Clare attended school in Ukiah and graduated from Ukiah High in 1945. While attending college in Sacramento, she met and married Robert Swan in 1947.
In 1949 they decided to move back to Ukiah, with its small town environment, to raise their family. She taught Sunday school and worked at the Presbyterian Church where she was also a member. In later years she worked for the County of Mendocino. Alice Clare was very active within her community. She was a Cub Scout den mother, a member of Soroptomist Club, Cultus Club and the Ukiah Garden Club.
Alice Clare loved to read and she read books to children at the library. She had a love for literature and when her eyesight became such that she could no longer read, she listened to books on tape.
Alice Clare was a special woman in that she had a wealth of world knowledge. She was also well versed on Ukiah and Mendocino County history and trivia, and eagerly shared this information with anyone who showed an interest.
She is predeceased by her brother James Wilsey. She is survived by her husband of nearly 70 years, Robert Swan, and her sons Michael Swan of Irvine and Marty Swan of Colfax and her daughter Rebecca Skrivanek of Healy, Alaska. She also has two nephews Brian and Bart Wilsey of Hopland, along with 10 grandchildren and 9 great grandchildren.
In memory of Alice Clare donations can be made to the Ukiah Garden Club, Soroptomist Club and the Grace Hudson Museum or any other organizations of your choice.


To order memorial trees or send flowers to the family in memory of Swan, Alice Clare, please visit our flower store.