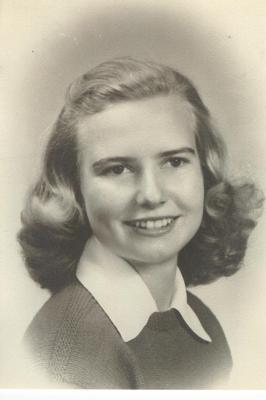 Obituary:
Margaret Sweeley, devoted wife, mother and grandmother, passed away on November 21, 2016 at the age of 90. An only child of James and Geraldine McConnell, Margaret was born on March 4, 1926 in Sacramento, California.
Margaret spent her early years in Sonora and Columbia California. She graduated from Stanford University in 1948 majoring in Botany. Margaret married John (Jack) P. Sweeley on December 27, 1950 in Columbia, California and they moved to Ukiah where she lived her entire married life.
Margaret is survived by her husband John, her two children Martha (Dave) Bookout of Ukiah, California and Phyllis (Don) Mendel of Pacifica; four grandchildren, Emilee (Jon) Kaeser, Yoav Mendel, Sivan (Jeremy) Sasson, and Amir Mendel.
Margaret first worked as a high school teacher and later for the Mendocino County recorder’s office. Margaret was a member of the First Presbyterian Church and various volunteer organizations in Ukiah. Connecting with children was a focus and passion for Margaret. For 13 years she served on the California State PTA Board of Managers as a child advocate and also on the PTA at the Trinity School in Ukiah. Margaret also managed the Ukiah Hospice Thrift Shop with more than 40 volunteers. She also served on various church boards, the Women’s Association, Hispanic Ministries and AAUW.
A Memorial Service will be held at the First Presbyterian Church on Monday, December 5, 2016 at 11 AM. Donations may be made in Margaret’s memory to the First Presbyterian Church or Phoenix Hospice of Willits, or the charity of your choice. Arrangements under the direction of Eversole Mortuary.


To order memorial trees or send flowers to the family in memory of Sweeley, Margaret Bowers, please visit our flower store.