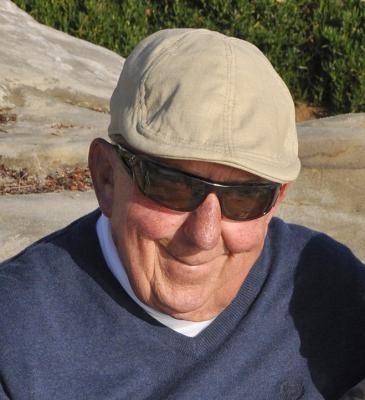 John passed away at home in his sleep Thursday January 22nd with his wife Linda at his side and his little dog Mocha lying by him on his bed. Born in Ukiah in 1938, John was a 4th-generation resident of Ukiah. He graduated from Ukiah High School in 1956 where he was student body president and a record-holding track athlete. After high school John served four years in the United States Coast Guard. During training in Groton, Connecticut he traveled to Cuba before being stationed in Cleveland, Ohio on Lake Erie. After leaving the service John graduated from Sacramento State College. In 1962 he married Sandra Rosell of Sacramento (who preceded him in death in 1997). They became the proud parents of two sons, Bradley Taylor (now of Hopland) and John Taylor (now of San Diego). John became a regional sales manager with Shell Oil and Gulf Oil in Sacramento setting sales records with both companies. Tired of the pressure of corporate life John decided to move home to Ukiah where he accepted a sales position with Ukiah Paper Supply becoming their top salesman until his retirement in 1998. In Ukiah he rekindled an old friendship with Linda Homler dating back to their years as classmates at Ukiah High School. They married in 2008. In retirement John worked part time as a medical courier for Alpha Analytical Labs. Since full retirement he and Linda have greatly enjoyed their children and grandchildren, their home and rose garden, their travels together and their little dogs Magic and Mocha. John was a life-long devotee of tennis both as a player and fan. He enjoyed matches with his Ukiah tennis buddies over many years, loved to watch professional matches on TV and yearly attended the Indian Wells tennis tournament. Always a masterful storyteller, John was a man of unforgettable character whose zany sense of humor, kind heart, generous nature and special charisma endeared him to his family and to a wide circle of friends, all of whom will greatly miss him. Preceded in death by his parents John and Barbara Taylor of Ukiah, John is lovingly remembered by his wife Linda, by son Brad, by Brad’s wife Jennifer and their son Nicholas, by son John, by John’s wife Patricia and grandsons Chase and Jett, by his brother Bob, by his wife Emiko and their children and grandchildren, by Linda’s children Julia, David, Shawn and Scott, by John’s loving cousins and by many good friends.

John’s life will be celebrated by family and friends at a memorial service at the Elks Lodge, 1200 Hastings Road, Ukiah, on Saturday, January 31st at 1 pm. In lieu of flowers the family recommends a donation to the Cancer Society or a favorite charity.


To order memorial trees or send flowers to the family in memory of Taylor, John Wakefield, please visit our flower store.