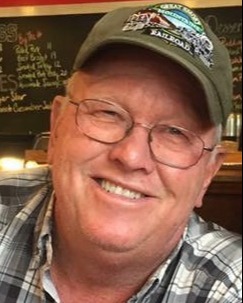 Terry Rand Elmer lost his battle with cancer and peacefully passed away on January 12th 2023. He was born July 19, 1946 in Quincy, CA.  At the age of 5, his parents David and Judith Elmer moved to Potter Valley.  Terry graduated from Potter Valley High School.and after graduation he joined the US Army and was stationed in Okinawa and served as a diesel mechanic.  After he served his time in the Army, he attended Laney Community College.  After college, Terry helped run the family logging business, San Hedrin for 25 years.  After the logging business closed, he went to work for Bill Pauli as their general contractor until he retired.  Terry enjoyed retirement with travel and playing with his grandkids.

Terry met the love of his life Joyce in 1971 and they were married one year later.  Terry and Joyce celebrated their 50th wedding Anniversary last August. Terry and Joyce owned and operated Elmer Orchards. Their peaches were well known at the local Farmers Markets.

Terry and Joyce have 3 children, Derek (wife Joyce), Mark (wife Domanie) and Jenifer (husband Salvador).  He was an extremely proud father.  They are blessed with 7 grandchildren: Connor, Dylan, Kyle, Nyah, Atenea, Aidan and Mia.  His grandchildren lit up his world.

Terry is also survived by his three siblings, Morrie,Allona and Neil

Terry was a gifted carpenter, woodworker, mechanic and just an all around smart guy (he knew how to fix anything).  Terry had a sense of humor that made people laugh and a smile that lit up the room.  He enjoyed volunteering his time with the Potter Valley Boy Scouts, Potter Valley Booster Club and to date he served as a board member for the Potter Valley Cemetery

A celebration of life potluck will take place on Sunday, January 29th from 1-4pm at the new Potter Valley Community Center. 10175 Main St. Please come share your favorite story about our beloved Terry

To order memorial trees or send flowers to the family in memory of Terry Elmer, please visit our flower store.