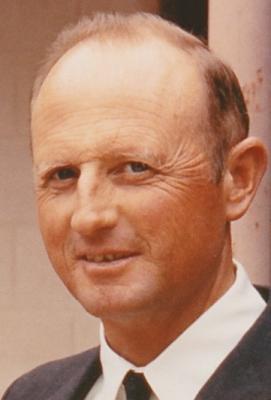 Obituary:
Paul Edison Titus was born on August 6, 1922 on the family Homestead along Brush Creek, in Manchester, CA. He was the son of Ernest and Jennie Mae Titus, the twelfth child of thirteen, and the last surviving child of the generation. Paul passed away peacefully at home in Boonville, surrounded by family on August 11, 2016
In 1944, he joined the Army and served in the Asiatic Pacific Theater during World War II and then settled in Napa, CA to be near family who had relocated. There he met Vera Tiezzi at the popular dance hall, the Dream Bowl. A love for music along with the ever-present twinkle in his eye made it difficult to keep Paul and Vera off the dance floor. Their dream came true when they married on July 20, 1947.
He and Vera moved to Boonville to be closer to the family Homestead and Paul purchased the Union Oil Distributorship, operating the business until 1966. Paul retired from Cal Trans after 18 years but continued grading roads for local loggers and his sons up into his early 80’s. They have lived in their present home since July 1959. Once settled into their new community, Paul and Vera did what was right; they got involved.
Paul was Constable of Anderson Judicial District from 1965 until retiring in 1992. He served as a volunteer fireman. He was a member and had been President of the local Chamber of Commerce as well as member and former President of Anderson Valley Lions Club. As a great supporter of the youth in Anderson Valley, Paul was instrumental in establishing Boonville Junior Buck-a-Roo Days; he served as Cub Scoutmaster for years; and he was a High School Basketball referee. Paul had a wide range of life experience and expertise: he was a sheep rancher, rodeo cowboy, wood worker; entered blue ribbon garlic in the Mendocino County Fair, and was honored to be chosen along with his wife Vera as Grand Marshall in the fairs’ 2012 parade. Being an avid hunter and fisherman all his life, the love for the outdoors became more of a challenge as Parkinson’s disease progressed. Most of all, he was a loving father, grandfather, husband and friend.
Paul is survived by his wife Vera, his three sons: Mark, Craig (Marti), and Dean; his two grandchildren Deanna Parrish (Ryan) and Jared Titus; and three great grandchildren Gwynn, Ky and Shay Parrish, along with numerous nieces and nephews.
The family would like to extend their heartfelt gratitude to Paul’s caregiver’s Terry Van Ree-Fox, and the staff at Phoenix Hospice.
In lieu of flowers donations may be made in Paul’s memory to Parkinson’s Research and to the Anderson Valley Senior Center.


To order memorial trees or send flowers to the family in memory of Titus, Paul Edison, please visit our flower store.