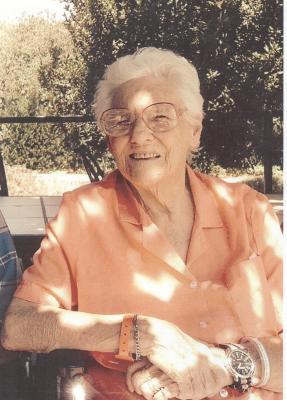 Obituary:
Esther May Keeton Traina loving wife, mother and grandmother passed away Tuesday September 16 surrounded by family after a long illness of renal failure. She was born July 1, 1929 in Richmond Virginia, daughter of George May Keeton and Bertha Condrey Keeton. She graduated from Manchester High School in 1947. Esther married William Jay Traina Jr. celebrating their 61st wedding anniversary this past June.
Esther loved to read, volunteered at the Ukiah Senior Center, member and former president of Women’s Auxiliary of the American Legion and Bingo was her passion. She lived in Ukiah for the past 25 years and prior to that owned and operated the Bluebird Café in Hopland with her husband, where she loved to talk to the customers. She is survived by her husband, William Jay Traina Jr., Ukiah, CA, Daughter Elizabeth Kay Samoly (Thomas Samoly) Burlingame, California, Daughter Terry Lynn Christopherson (Steven Christopherson) Dardanelle, Arkansas, Son James Nathan Traina Redwood City, California, Eight Grandchildren and 10 Great grandchildren. She was preceded in death by sons William Jay Traina III and George Mark Traina.
Viewing will be at Eversole Mortuary on Thursday September 18 from 5-8 pm
With Mass of the Christian burial at Saint Mary of the Angels Catholic Church on Friday 1 pm. Burial at Hopland cemetery to follow.

To order memorial trees or send flowers to the family in memory of Traina, Esther May Keeton, please visit our flower store.