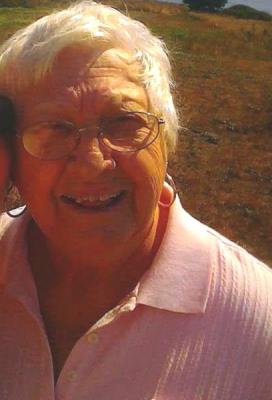 Obituary:
Jessie Joan Treto entered into rest November 22, 2017 at Ukiah Valley Medical center in Ukiah, CA at the age of 89 years 1 month and 1 day old.
Born in Dublin, Ireland in 1928, the oldest of 7 children she later moved to England where she married an American soldier in 1951.
She’s survived by a son Michael, daughter Robin (Dan Jones); grandchildren Christopher, Brianna, Amanda, and Melissa; three great- grandchildren; as well as sisters in England Pat, Yvonne, and brother Teddy from Las Vegas.
A devout member of St. Mary of the Angels Catholic Church for many years, she volunteered at Ukiah Valley Medical Center for over 35 years, working in the O.B. including sewing the Christmas baby stockings every year for many years.
Very socially active she had a passion for dancing including line dancing at the Ukiah Senior Center where she made many friends and had a lot of fun.
A rosary will be held Wednesday, November 29th at Eversole Mortuary at 4:30 pm followed by a memorial service Thursday, November 30th, at St. Mary of the Angels at 1 pm.
She was loved by many, and will be greatly missed.

To order memorial trees or send flowers to the family in memory of Treto, Jessie Joan, please visit our flower store.