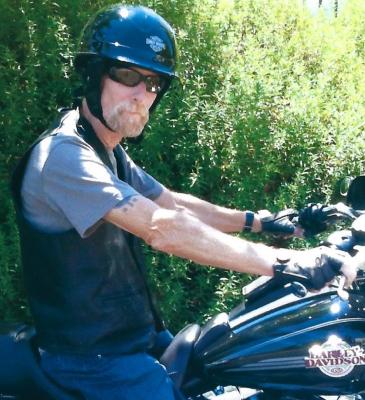 Doug Turner passed away peacefully in his sleep on June 19, 2020 at his home in Redwood Valley after a seven year battle with cancer.
Doug was born on May 20, 1946 in Salt Lake City to Del and Marie Turner. He spent most of his childhood in Novato California. Doug also had many fond memories of his time spent in Canada and Greenland where his father was stationed in the Air Force. Doug graduated from Novato High School and attended College of Marin. He then followed in his father’s footsteps joining the United States Air Force. He served four years and had many stories of his time stationed in Thailand.
He married Janet in 1969 and they celebrated their 50th anniversary in November 2019. He was always so proud of his children Brendan and Megan and grandchildren Caleb and Elena, they gave him great joy.
He worked for the phone company for many years and after retirement worked at MTA as a busdriver and later drove a bus for the Ukiah Senior Center. He was an avid Forty-niner and Giants fan and rarely missed a game. In 1980 he took up windsurfing and spent countless hours at Lake Mendocino. He loved using his experience to teach others the sport. Later in life he bought a motorcycle and that became a passion. He loved going on rides with his brother Brent and their trips to Colorado were cherished memories.
Doug was proud of his more than 30 years of sobriety and was active in AA where he made many lifelong friends.
Doug was preceded in death by his parents Del and Marie Turner, grandparents Joy and Eleda Huff, Theodore Turner and Ralph and Blanch Eckhardt. He is survived by his wife Janet, children Brendan Turner (Sarah), Megan Turner-Brown (Pete), grandchildren Caleb and Elena Turner, brother Brent Turner (Clarice and their son Michael). Sisters-in-law Linda Sanchez (Robert), Donna Clark and their families. He is also survived by his dear friends the Smallcomb and Cromer families and the many cherished members of his AA family.
Services will be held at a later date to celebrate the life of Doug Turner. To be notified of the date and time of the memorial service please email turnermemorialrsvp@gmail.com with your contact information. If desired make a donation in Doug’s name to your favorite charity in lieu of flowers.
Doug will be remembered for his love of all animals, he never met a dog he didn’t speak baby talk to.

To order memorial trees or send flowers to the family in memory of Turner, Douglas Ralph, please visit our flower store.