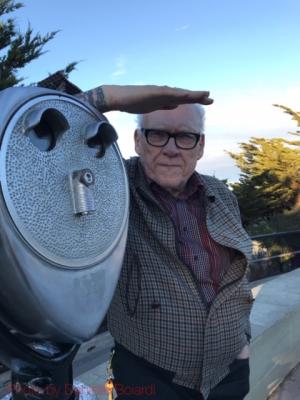 Obituary:
Lyle Tuttle, proud resident of Ukiah, passed away peacefully on March 26th at the age of 87. Lyle had recently celebrated the seventieth anniversary of his world renowned tattoo career that began in the city of San Francisco in 1948. Lyle settled in Mendocino County as a young boy with his beloved parents Howard and Opal around 1936 from Iowa. His wanderlust brought him to San Francisco in 1946 where getting his first tattoo launched what would be a tremendous historical career. He became a legendary emissary for the practice of Tattooing as he was tattooed and tattooed others across seven continents and diverse cultures. He was a veteran of the Korean War, a recognized Samoan Matai chief, and is said to have done more for the evolution of Tattooing, and popularizing women getting tattoos than any other figure in history.
He soared to greater fame after being featured on the cover of Rolling Stone Magazine in 1970 and then became an iconic figure of The Summer of Love culture and movements. He was, and will always be revered, for his boundless creativity in Tattooing and his teaching and furthering of good tattoo practices across the globe. Since1960 his long running Tattoo shops and his vibrant and witty personality have helped make him a San Francisco Icon. Lyle was also a highly talented metalsmith, speaker, tattoo machine builder, historian and he amassed the largest collection known of Tattoo Art and History. He is survived by his daughter Suzanne Tuttle and his wife Judy Tuttle. Lyle famously said “A friend is just someone you haven't met yet” , and he was an adored and greatly respected friend to countless people of all ages around the world. A celebration of life service for Lyle Tuttle will be held this Saturday, March 30th at Eversole Mortuary in Ukiah at 2pm.

To order memorial trees or send flowers to the family in memory of Tuttle, Lyle, please visit our flower store.