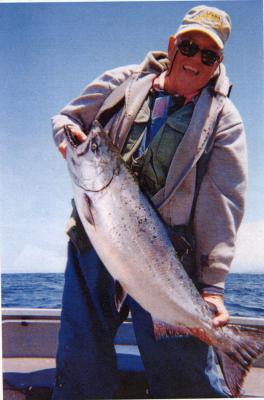 Obituary:
Born in Lester Iowa to Gertrude and Dick Van Wyhe, the third of five children. He grew up on a small farm outside of Colton South Dakota. He attended Augustana College graduating with degrees in Chemistry and Biology in 1955. After graduating he served in the US Navy and while based Southern California he met Donna Brech and they married in the fall of 1957, settling for a short time in Santa Monica where they started their family.
Dick returned to college, completing his teaching credential at Humboldt State. He began his teaching career in Pico Rivera California. The desire to raise their family in a more rural environment led to moving the family to Ukiah in 1964 where Dick taught Chemistry at Ukiah High School until 1988. He enjoyed his teaching career and made life long friends among his fellow faculty members. He never forgot a students name even if had been decades since he had them in class. He especially loved the beauty of Northern California backpacking, abalone diving and especially salmon and steelhead fishing. He was legendary in his success at fishing. He enjoyed making things with his hands, building toys and furniture for his grandchildren, making guitars and carving fish and animals from wood.
Dick passed away peacefully on March 14, 2020. He is survived by his wife of 63 years Donna Van Wyhe, their four children and his six beloved grandchildren.
The family wishes to express their gratitude to the staff at Redwood Cove for their kindness and care.
Visitation at Eversoles Thursday 10-1
Graveside service at Ukiah Cemetary 1:30

In light of current limitations on social gatherings a celebration of life will be planned at a later date.

To order memorial trees or send flowers to the family in memory of Van Wyhe, Dick Dale, please visit our flower store.