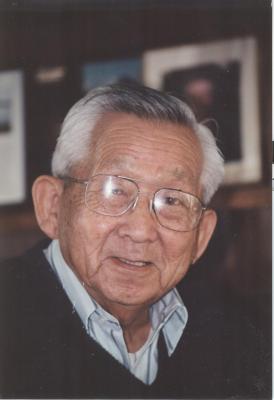 Obituary:
Yasuo Wada was born on October 8th, 1918 in Ukiah, Ca. On The Alex Thomas Ranch. He was one of seven children born to Motogusu & Tamae Wada. He passed peacefully in his sleep on November 27, 2014. He had just celebrated his 96th birthday.

Born into a farming family Yasuo began working on the Thomas ranch helping his father at an early age. He attended Ukiah Grammar School (now the civic center) as well as graduating from Ukiah High School (now Pomolita Middle School) in 1937. Soon after graduating highschool WWII broke out where Yasuo was drafted into the U.S. Army while his family was relocated to Amache Interment Camp in Colorado. Before being stationed in Germany he would marry Hatsumi Takao who was also from a farming family in Ukiah. Soon after returning from the war, while still at the interment camp, Yasuo & Hatsumi gave birth to their first son Willie.
Yasuo, Hatsumi & newly born Willie would soon return to Ukiah. Yasuo started his career as a United States Postal worker as a mail carrier. He would often work as a carrier by day and farmhand on the Thomas Ranch till there was no light. Working two jobs he was able to buy their first house on Luce Ave. Yasuo & Hatsumi gave birth to their second child, a daughter, Amy.
In 1965 Yasuo & Hatsumi purchased their final home on south Dora St. where they would semi-retire. Yasuo had a love for gardening as well as fishing any chance he would get, often going as far as Alaska. Yasuo and Hatsumi were members of The Ukiah Granden Club showing their elaborate Japanese style garden and Koi pond any chance they were offered. He was also a long standing member of The Japanese American Citizen's League.

Yasuo Wada is survived by his sister Sets Yoshimura of San Francisco, son Willie of Ukiah, Son-in-law Richard Nichols of San Mateo, twin Grandsons Bobby Masuda of Sunnyvale, David Masuda of San Mateo and Nicholas Wada of Ukiah as well as Stacy Oakley of Albion. He had one greatgrandson Tony Oakley of Albion and one great-great granddaughter Ashlyn. He also has many nieces and nephews.

He is preceded in death by his wife Hatsumi, daughter Amy, sisters Chieko and Mary. Brothers Takashi, Fujio and William. As well as his first cousin and best friend Henry “Hank” Wada.

He will truly be missed by his friends and family.


To order memorial trees or send flowers to the family in memory of Wada, Yasuo, please visit our flower store.