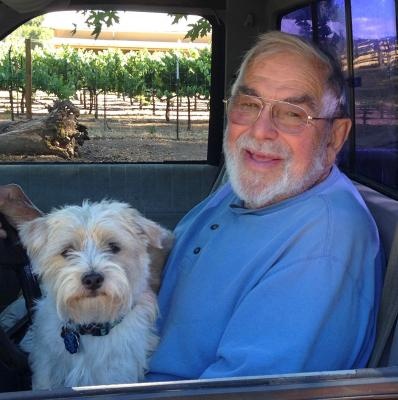 Obituary:
On July 3, 2017, Elmer Joseph Wellik, aged 87, died peacefully at Ukiah Valley Medical Center in Ukiah, CA, with loved ones at his side. Born November 12, 1929 to Joseph William and Mildred Elizabeth (Kopacek) Wellik in Britt, Iowa, he was the second of seven siblings, all of whom survive his passing. His farm roots blessed him with an everlasting love of gardening and growing things. He lived a big life, full of passion, ambition, hard work, and hearty laughter.

Mr. Wellik served in Korea as a US Marine, an identity he proudly embraced all his life. He graduated from University of Iowa in 1967 with a bachelor’s degree in science, minoring in engineering. In the 1960s, he was employed at North American Aviation in the Los Angeles area, contributing to the Apollo moon missions and Minute Man missile program. In 1972 he began a successful 27-year career as a State Farm Insurance agent in Newport Beach, CA. In 1999 he retired to Redwood Valley, CA, in rural Mendocino county, tending to his walnut farm and grand vegetable patches, until the time of his passing. He enjoyed family gatherings, barbequing, riding his mower, and relaxing with his dogs.

He is survived by his loving wife of 24 years, Debra (Croswell) Wellik. His six children are: Kellie Monahan of Portland, OR; Julie Bloomberg (Mark) of San Rafael, CA; John Wellik (Anne) of McKinleyville, CA; Beth Thompson (Sean) of Santa Cruz, CA; Nicole Marin (Johnny) of Ukiah, CA; and Kathryn Elizabeth of Redwood Valley. His ten grandchildren are Devin Monahan (Candice), Lomes Oleander, Ben and Jeremy Bloomberg, Dean and Joseph Wellik, Conor and Liam Thompson, and John and Lucia Marin. His siblings are Monica Paca (Leonard), Joseph Wellik (Gloria), Vivian Pritchard (William), Mildred Horstman (Paul), Marvin Wellik (Kay), and Jerry Wellik (Kathleen). He was preceded in death by his first wife, Carol Ann (Pennebaker). He will be remembered and missed by all who loved him.

In lieu of flowers, please make a contribution to Phoenix Certified Hospice of Mendocino County.

Visitation will be held on Sunday July 16, 2017 from 2-8 PM at the Eversole Mortuary with a Rosary being said at 5 PM. A funeral mass will be held on Monday July, 17, 2017 at 12 noon at St. Mary of the Angels Catholic Church. Burial will follow at Ukiah Cemetery.


To order memorial trees or send flowers to the family in memory of Wellik, Elmer Joseph, please visit our flower store.