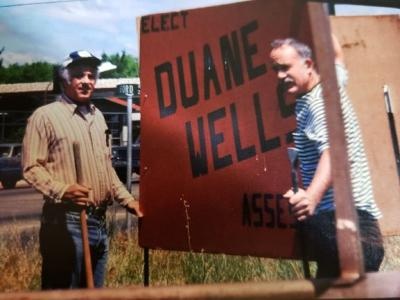 Obituary:
Duane Kemp Wells, much loved and highly respected community leader, died Wednesday, September 16, 2020, with friends and family by his side. He was 89.
Duane was born May 13, 1931 in Hollywood and grew up in Temple City, CA. He was the eldest son of Byron E. Wells and Martha Waiva (Kemp) Wells. The family later moved to Balboa, CA where he graduated from Newport Harbor High School in 1949.
He studied forestry at Oregon State University when his course work was interrupted by the draft. Duane’s military service began in 1952 where he was a member of the US Army 66th Engineers Topography Company serving in Germany. After release from active duty in 1954, Duane returned to Oregon State and graduated with the class of 1956. He remained connected with “the Beav’s” by taking several international trips sponsored by the alums.
After graduation, Duane worked for private timber companies in Northern California spending much time in Garberville and eating at Bill Pass’ Restaurant where he met Mr. Pass’ daughter and future bride, Patricia M. Pass. Patricia and Duane were married in 1956 and made their first home together in Ukiah, where they remained. Patricia preceded Duane in death on February 19, 1986. By all accounts their marriage was filled with laughter and good times with extended family and friends.
Duane worked for the Mendocino County Assessor’s office for over 34 years, retiring in 1991 after his second term as County Assessor. His contributions of time and leadership to a wide variety of organizations and state and local political campaigns are too numerous to be listed, but include president of the California State Board of Equalization and both the Northern California and California Assessors Associations, as well as Board Chairman to the Mendocino Council of Governments. In later years he focused on educating children on “where houses come from” by explaining the importance of trees in our lives. He was a founder and very active contributor to the Redwood Valley Outdoor Education Project as a leader and educator. Duane also taught school children during the Forest Conservation Days held in the South Bay Area.
In addition to traveling, Duane found great joy in piloting small planes. In 1966 he began flying fire patrol and was always ready to fly when called. Even after his flying days were at an end, he stayed active through the Mendocino County Co-op Aerial Fire Patrol organization.
One of the numerous certificates of acknowledgement for his contribution to professional organizations provides evidence of the quality of his character. The Mendocino Council of Governments stated “Duane is recognized as an outstanding public official and is well respected as a community leader.”
Duane is preceded in death by his parents, wife, and brother, Ralph E. Wells. He is survived by his daughters Lee Ann Vallee (Randy Vallee) of Anchorage, Alaska, and Kathy L. Wells (Larry R. Spencer) of Salem, Oregon, grandson Nathan D. Tuttle, great-grandson Elijah Tuttle and great-granddaughter Elizabeth Tuttle, all of Davenport, Florida, as well as his longtime companion, Milli Hickey of Ukiah. He is also survived by Barbara Wells, sister-in-law, and Waiva (Wells) Brown, niece.
Due to the pandemic, no service will occur. In lieu of flowers, donations can be made to Redwood Valley Outdoor Education Project at rvoep.org or by mail to RVOEP, PO Box 45, Redwood Valley, CA 95470. Please note “on behalf of Duane Wells”.


To order memorial trees or send flowers to the family in memory of Wells, Duane Kemp, please visit our flower store.