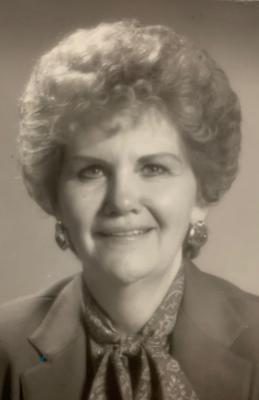 Obituary:
Vondalee Wynona Weston passed away peacefully at her home on Wednesday, May 27. Vondalee was born in Portales, New Mexico on June 27th, 1932 to John and Beulah Brown Cyphers. The family moved to California in 1936 settling in Ukiah. Vondalee graduated from Yokayo Grammar School in 1946. She then attended Ukiah High School and graduated in 1950. During her years at Ukiah High, she worked part time at the Savings Bank of Mendocino County. After graduation, she worked full time at the Savings Bank for all of her working life, advancing to the position of senior vice president before retiring with over 46 years of dedicated service to the community of Ukiah. After graduating from Ukiah High, she married Roy Puget and during their marriage, they had 4 sons, Steve, Johnnie, Barry and Tracy Puget. Later in life, she married Douglas Weston Sr and they had a son, David Weston. Vondalee loved her sons and was so proud of each and every one of them. She also greatly enjoyed socializing with family and friends. Some of her fondest memories are of the family reunions and weekend summer barbeque's getting to spend time with her favorite people. Vondalee also loved baseball. Whether it was going to the local ball field to watch her sons play or going to Giants games in San Francisco with her family. After she retired, she loved playing Bunco, numerous card, dice and domino games with her sister LuJuanna and her close knit group of friends. Every week she looked forward to her "Friday Lunch Bunch", a group of retired friends and co-workers that went to a different location each and every Friday to enjoy a meal and good company. Vondalee was an avid reader, enjoyed doing the crossword puzzle in the paper everyday in PEN and not in pencil, which showed her commitment to doing it right the first time. Something she preached to all 5 of her sons when they were growing up. And she was very addicted to the Hallmark Channel. She really enjoyed a good love story with a happy ending.
Vondalee is survived by her 5 sons Steve, Johnnie, Barry Tracy and David, step daughter Louise Parks and step son Douglas Weston Jr. She is also survived by her Sister LuJuanna Carlstedt, 13 Grandchildren and numerous Great grandchildren, nieces and nephews. Vondalee was preceded in death by her loving husband, Douglas Ray Weston Sr in 2010. At Vondalee's request, there will be no service at this time. A family celebration of life will be planned in the future when conditions allow for people to gather without social distance rules in place. In lieu of flowers, the family requests you make a donation to your favorite charity to assist others in need during these tough times.

To order memorial trees or send flowers to the family in memory of Weston, Vondalee Wynona, please visit our flower store.