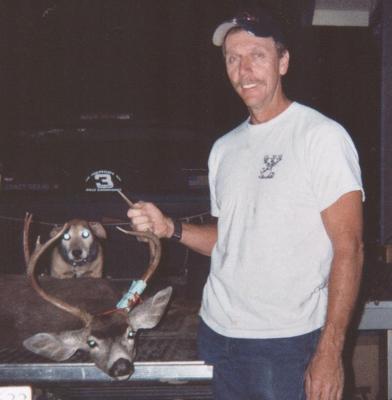 Jerry was, without warning, tragically taken from us on January 19th 2015. Born October 28th 1960 in Fort Bragg, CA, to Coy and the late Jerry Whitaker Sr., Jerry lived life to the fullest, he and his best friend Lyle were true examples of outdoorsman, enjoying a life time full of hunting and fishing trips, making Camo his favorite color. A special place to them was hiking to “The Rock” on the Eel River where Jerry and Lyle would watch and listen to the surroundings of animals and the river all while solving world problems. He was an avid abalone diver, always sharing his catch with lucky family and friends.
NHRA Drags and NASCAR Races were always a favorite. Learning to fly was another accomplishment, he was very proud of.
Jerry worked for LP and GP in his early years, eventually moving on to the County of Mendocino, and finally to the City of Ukiah, as Supervisor of Streets and Maintenance, where he was currently employed. He was a professional Taxidermist, who took great pride in his artistry.
He was a member of Search and Rescue and a Certified Black Water Diver, being called out at a moment’s notice to try to help someone in need.
Jerry is survived by Denise Whitaker, the love of his life, together for 33 years. They met at a Halloween party in 1981, married in 1986 and have been soulmates ever since. He is also survived by his mother Coy Engel, step-father Tony Engel, sisters Mollie Kuhlman and Valerie Elizondo, brother Ryan Whitaker and wife Mona, step-mother Sharon Whitaker, brother-in-law Dude, his best friend since childhood Lyle Valador, his faithful 4 legged companions Beretta and Cookie, numerous nieces, nephews, aunts, uncles and countless others. Jerry was preceded in death by his father Jerry Whitaker Sr. and mother-in-law Sharon Fleming.
A Celebration of Life will be held January 31st at 1:00pm at the Ukiah Valley Conference Center. If you have stories and pictures, please bring to share.
Eversole Mortuary is in charge of arrangements.


To order memorial trees or send flowers to the family in memory of Whitaker Jr., Jerry David, please visit our flower store.