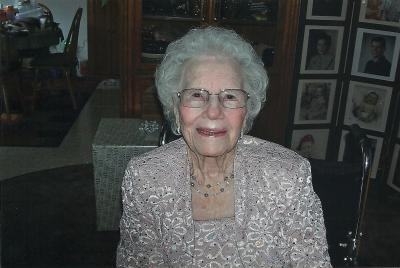 Obituary:
Anna Withrow passed away peacefully in her home on January 15, 2021, surrounded by her family.
Anna was born on January 11, 1921, near Caddo, Oklahoma. She was married to O.C. Withrow (deceased), on May 29, 1942 in Oklahoma. They relocated to California in 1946 and settled in the Ukiah area in 1950.
She is survived by three children: Cindy Eastwood, Gary Withrow (Beverly) and Tia Allen. Four surviving grandchildren are Michael (Jasmin) Withrow, Tracy Turner, Bruce Withrow and Natalie Lumpkin. Seven great-grandchildren and four great-great grandchildren also survive.
Anna was a homemaker and operated a day care in her home for many years, having as many as 12 children every day ranging in age from 3 months to 6 years. The day care moms coined the name “Miss Ann” for her and she will always be known by that name to many of her friends.
After her youngest child finished school, she gave up the day care and worked outside the home as a cook for Ukiah Convalescent Hospital until her retirement in 1983.
She loved her family and friends and always gave of her time and talents to help anyone when needed. She loved her church and was the last surviving founding member. She attended faithfully until her health declined five years ago.
Preceding her in death is grandson Roger Allen Marco and great granddaughter Francesca Schetter. Also, preceding her in death were five sisters (Velma Dockins, Clara Scalf, Ola Piper, Una Ledbetter and Ella Mae Ledbetter), and two brothers (Clarence Peek and R.L. Peek).


To order memorial trees or send flowers to the family in memory of Withrow, Anna, please visit our flower store.