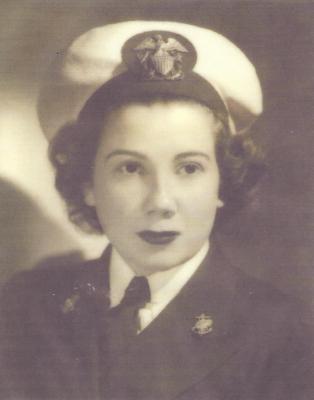 Obituary:
Vivian Ruth Wren passed away gracefully on 11/28/2014 in the house she called home for over 50 years. Vivian was born June 11, 1921 in Kansas City, Mo. to Henry and Hulda Charno. She attended Alan B. Ladd Elementary & graduated in 1937 at the age of 16 from Central High School. She also attended Baker University in Baker, Kansas. Then became a Registered Nurse in 1939, graduating from Mercy Hospital in Kansas City.
In 1942 Vivian enlisted in the U.S. Navy. She served our country as a lieutenant for 4 years during World War II. She first served at Mare Island taking care of amputees. Then she was re-located to a German POW camp at Fort White in Oregon. Her last days of the war were spent at the San Diego Navy Hospital.
In 1946, Vivian met her match in life, Roger Wren. Although her mother told her never to trust a redhead…Vivian was too smitten & married the man of her dreams. Shortly after the birth of their first child, Roger was offered his first job as Head Football coach at Fort Bragg High School in Fort Bragg, California. Shortly after settling there, along came their 2nd child, Steven. While living in Fort Bragg, Vivian came down with Polio. She barely survived, losing as unborn child & having to be driven to San Francisco for her recovery. But that she did…
Then in 1952, Roger was offered a position at Ukiah High School as the Head Football coach. When they arrived in Ukiah, Vivian went to work at Ukiah General Hospital as a surgical/floor nurse. In between all of this…2 more children, Katherine & Christopher were born. Then she left to teach Psychiatric Nursing at Mendocino State Hospital. This wasn’t enough for Vivian. So she decided to go back to college. 5 days a week she commuted to Sonoma State University where she earned her Public Health Nursing Degree. Shortly after that, she became the Ukiah Unified School Nurse for Hopland, Nokomis, Oak Manor, Calpella & Ukiah High School. She retired in 1987. She also studied at Oxford University in England.
She & Roger were able to travel to far parts of the world together. But they most enjoyed their adventures as Snow Birds with their dear friends & often took their grandchildren with them.
Vivian was a lifelong member of Beta Sigma Phi, Zeta Tau Alpha and an Honorary member of AAUW. She was also the nurse at Mendocino Woodlands for the Camp Fire Girls. She was an active PTA member & an honorary President. She volunteered at the Hospice Gift Store for 16 years & at DMV for 6 years. Viv was an avid Bridge player. She didn’t mind bragging about when she won the pot of $1.25!! Throughout the years she belonged to numerous other clubs. One year she even volunteered to be the Easter bunny for the Lion’s Club Easter Egg Hunt.
Vivian was a Breast Cancer survivor of 40 plus years. She was one of the first women in Ukiah to have a mastectomy. She was a fighter & huge contributor for this disease. She was part of an aging study through Harvard for over 50 years.
She was also a huge San Francisco 49er fan as well as loving “her” San Francisco Giants. At age 93, she announced that she had decided that she preferred watching baseball over football.
Vivian is survived by her children, Jennifer Yturralde (Guy), Steven Wren (Sherry), Kathy Wren-Orth (Jerry) & Chris Wren (Renae).
Grandchildren, Rowdy Nixon (Cathy), Amanda Nixon, Nate Daugherty (Shannon), Christopher Daughtery, Meghan, Morgan & Jessica Wren, Lauren & Brooke Wren. Great Grandchildren Jazzmine Burch, Nathan, Alice, Lucy & Viviana Daugherty & Ryli Nixon. She also leaves behind her precious cat, Shadow. Vivian was preceded in death by her husband Roger, sister Kathryn & brother David.
Vivian was one of the “UKIAH” legends that has left us. She requested that there are to be no services. But reminded her children & grandchildren that she WILL be watching us.

To order memorial trees or send flowers to the family in memory of Wren, Vivian Ruth, please visit our flower store.