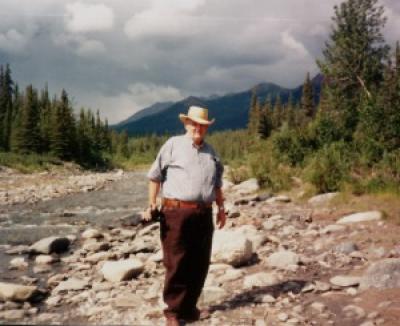 Obituary:
Frankin Thomas Wyant, Jr.
Frank Wyant, age 80, passed away peacefully at his home just past midnight on September 11, 2016 with his family by his side. He had a been a resident of Boonville for 50 years.
Born to Franklin Thomas Wyant, Sr. and Frances Mabel Ross, on February 21, 1936 in O’Neill, Nebraska, Frank spent most of his childhood living a typical country boy’s life on the family farm in the Nebraska plains. He had chores and animals to tend to but he still found time to fish, hunt, trap varmint on the creeks and enjoy ice-skating on the frozen ponds in the winter. Unlike the familiar old-timer joke, he really did ride a horse 3 miles in the snow to get to school every day. Except it wasn’t uphill both ways. It was probably during the farming days that he developed his life-long affection for tractors and any other kind of motorized equipment. He learned to drive a tractor at age 12 and never really stopped.
When Frank was a sophomore in high school, his family moved to Weaverville, California where he attended Trinity High School. It was there he met Jo Ann Bailey and they eloped immediately following graduation and started a family.
In a few short years, Frank accepted a position with the California Department of Transportation (Caltrans) in Woodland, California and so the young family moved to Esparto, California. to be near Frank’s work. Eight years later, Frank transferred to the Boonville Caltrans maintenance yard and remained there until he retired at the age of 58 in 1994. Although he was ending a 37 year career with the State he was beginning new travel adventures from Alaska, Panama Canal, Mexico, Hawaii, Canada, Jamaica, much of the continental US and beyond.
Through the years, Frank has enjoyed a great deal of hobbies such as gardening, woodworking, small engine projects, fishing, hunting, camping, traveling and cheering on his children and grandchildren at sporting events. He was a perfectionist in all his endeavors and could fix everything. He could be found “tinkering” in his workshop most of the time. He was a 4-H and Cubscout Leader when his children were young and supported them in all of their efforts. He was a member of the Anderson Valley Lions Club for over 40 years, the Anderson Valley Grange Club, the Cannibal Feed Luncheon Club and was very proud to serve on the board of directors for the Mendocino County Fair for over 20 years. One of his biggest passions was collecting and restoring antique tractors in his retirement years. He was a founding member of the Kimmies of the Codgy Moshe—a group of local men that enjoy --restoring tractors and machines.
Frank is survived by daughters Cathy Keech (Frank) of Ukiah, CA and Renée Lee (Kevin) of Boonville, CA; son, Bryan Wyant (Elizabeth) of Boonville, CA; daughter-in-law, Schevilla Wyant of Willits; brother, Allen Wyant (Beverly) of Anderson, CA; sister, Connie Pascarella of Red Bluff, CA; brother-in-law, Dan Bailey (Jean) of Shasta Lake, CA; grandchildren, Jennifer Caudillo (Jason) of Ukiah, Clint Wyant (Billie) of Willits, CA, Derek Wyant (Nichole) of Boonville, CA, Ashley Wyant of Carmichael, CA, Trevor Gunby of Boonville, CA, Garrett Mezzanatto of San Diego, CA and Drake Mezzanatto of Santa Rosa, CA; 5 great grandchildren, James Clarke, Bailey Caudillo, Connor Wyant, Isabelle Caudillo, and Aaliyah Byrd; 1 great-great granddaughter, Leila Clarke; numerous nieces, nephews and extended family. Frank is also survived by his special friend and companion, Joy Frazer of Boonville, CA. He was preceded in death by his wife of 54 years, Jo Ann Wyant; son, Richard Alan Wyant, and his parents.
A private family visitation was held on September 14, 2016 at Eversole Mortuary in Ukiah, California and Frank’s remains were cremated. His ashes, along with his late wife, Jo Ann Wyant, will be laid to rest at Evergreen Cemetery in Boonville, California.
A celebration of life potluck will be held in memory of him at 1 p.m. on October 1, 2016 at the Mendocino County Fairgrounds’ Apple Hall Auditorium. Please bring a side dish to share and your favorite story about Frank too.
The family would like to thank Phoenix Hospice, Hospice of Ukiah, Terri Fox, and Judy Nelson for their care and compassion during Frank’s final days. In addition, they would to thank Kati Johnson, Steve and Terri Rhoades, Bob Fowler, Dan and Jean Bailey, the entire Walker Family, and Joy Frazer for all of their love,


To order memorial trees or send flowers to the family in memory of Wyant Jr., Franklin Thomas, please visit our flower store.